Rockman 2 The Power Fighters always felt like it had a lot going on. Building up to Rockman’s 10th Anniversary, it was in many ways a marked improvement from the first Rockman arcade title, incorporating separate but intertwined stories and objectives, new challenge mode rankings like time attack, the return of the animal helpers, new upgrades and moves, even a brand new mysterious playable character. With ten different endings in all, it has the most endings of any Rockman game to date, and included some of the most talked about endings in all of classic Rockman.

It’s no wonder then that Rockman 2 received a lot of hyping by Capcom, like Rockman’s very first Secret File and this article from CFC Style Fan Book Vol. 1. 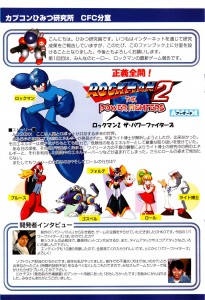 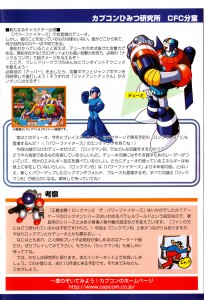 Hello! Secret Researcher here, reporting in. You know you can always catch up with my findings in my reports via the internet, and now you can find my additional research here in the newly established Fan Book. I hope you’ll enjoy reading these as much as I enjoy writing them!

For my first report here, I’ll be doing some digging into the latest game of that beloved hero of everyone, Rockman!

A.D. 20XX. The world of the future, where robots and mankind coexist.

One day, a yet unknown form of energy was discovered on a small island. Dr. Right wasted no time in setting out to analyze this new energy, but found performing a full analysis impossible. It was soon recognized that despite its infinitesimal size, this energy was incredibly powerful. Great precautions had to be undertaken in handling this incredibly dangerous energy.

Then late one night, a code red emergency suddenly rocked the island! Wily mechas had launched a surprise attack, stealing the energy right out from Dr. Right’s experiments as well as the energy parts based on that research that were still under development. Furthermore, Roll was completely missing!

Can Wily be up to his old tricks once again? And where on Earth is Roll?

“Hey, this is OHKO. Following up on the last game, Power Battle, here I am once again doing the planning for the game. What do you think of Power Fighters so far? With the new system, we’ve introduced special moves, extreme multi-hit combos, and even various leaderboard systems like Time Attack and Score Attack so you can really kick loose and have fun going for the top! We’ve even gone all out and created 10 different endings, so I hope you’ll try to see them all! Anyway, please enjoy Power Fighters!”

“I’m Hirokado, the lead software programmer. I also worked on the last game, too. There were a lot of little things I know we were unsatisfied with in the first game (like why couldn’t the dog be in it?) and other things we weren’t able to do for various reasons (usually for lack of time), that’s why this time around we’re doing everything we can to improve on those issues. So if happen to see this at your local game center, please go ahead and give it a try! At our location tests (that’s what we call it when we do market research before the game is released, by the way) we’ve gotten some encouraging feedback from arcade surveys, saying “this game is a lot of fun!” so we’re pretty sure we’ve gotten it all right this time. Thank you everyone for all your support!”

Power Fighters marks the introduction of Duo. But as yet, nobody knows much of anything about him! Where does he come from, and what is it he’s really after? For now, those questions remain a mystery.

What we do know at present is that Duo has a fighting power that towers above the others. His offensive ability is currently the highest out of all the robots, and his special technique the “Knuckle Combo” deals massage damage!

For all you members of the Friendly Club, we’ll now reveal the secret to performing this one point technique, so listen up!

Right after using the special move “Upper”, press the attack button and the jump button simultaneously to continue the barrage! Do this correctly and you’ll experience the awesome power of the “Giant Knuckle” attack for yourself!

By the way, Duo will also be appearing in this winter’s upcoming game Rockman 8 for the Playstation & Sega Saturn! (As you will also learn in Duo’s endings for Power Fighters!)

There are still a lot of mysteries surrounding Duo at this time, so what can we expect to see him doing in Rockman 8??

Duo seems to be here on Earth in search of something. He appears to have some sort of radar equipped in his head for detecting energy signatures to help him locate whatever this something is. Furthermore, the energy that Duo himself uses seems to be of a kind that can’t normally be found anywhere on Earth. The story of Rockman 8 takes place half a year before Power Fighters. Even so, you can expect Rockman, Forte, and Blues to return, powered up like never before! All these mysteries should be resolved in Rockman 8. No doubt you’ll be looking forward to it with great anticipation!

*Pictured here is an image screen for Rockman 8.

How did we come up with the ideas for “Ultimate Justice! Rockman 2 The Power Fighters”? We started with establishing that the arcade series of Rockman would be in a parallel world so to speak, so we could be free to make changes to the main characters, enemies, settings and so on that you normally see in the home consumer version of the series. (How all this actually appears to the fans, however, I’m not so sure.) This time we made a small connection with Rockman 8, but even so there are still some things, like with Rockman and Duo, that are at odds with the main series portrayal…

In any case, we hope you enjoy the new special moves and simultaneous two player action that you’ll only find in the arcade version. You certainly don’t want to miss out on playing this! And of course, keep that anticipation running for Rockman 8 as well!

Well then, it’s about time I was returning to the lab. Let’s meet again soon, remember you can always find me on the internet. And I’ll be back at this annex again for the next issue we’re planning for around October. Until then my friends, I must bid you adieu!

“See you next time!”

This article from the very first issue of the CFC Style Fan-Book was to serve as the prototype for a series called the Capcom Secret Laboratory (“Capcom Himitsu Kenkyuujo”). Its initial focus split between hyping a new game using game tips and developer commentary with acting as a segue/addendum to the Capcom web page’s newly revamped Secret Lab section. After the initial article, the column switched gears and went fully into being an entertaining companion to the web site, told in an illustrated style. The site itself was a lot like the books, with both fan art submissions and rare pieces by Capcom artists, merchandise news, question and answers, and various photos, stories and other examples of the Capcom staff hard at work at having fun and being silly. Since they never returned to the initial format seen here, this article is fairly unique.

As is some of the info it gives, like Duo’s energy radar in his head. We don’t hear it mentioned specifically again, but we do see its effects with how easily he chases down the Evil Energy in 8. Then again, it also makes the open-ended promise to reveal things in 8 that still have yet to be revealed over 10 years later, like where exactly Duo came from, and what drives his quest against the evil (i.e. is he a space-cop?)

The pages also featured a famous early image screen from 8 that circulated several gaming mags across the globe in ’96. In this context it actually means a concept model screen that was mocked up, rather than being an image taken during play from the actual game in progress. As you probably know, Rockman 8 has been big news recently as two beta versions have finally been publicly dumped. If you haven’t seen yet, go check it out! (And here too!)

I’m sure that just as they predicted there, some fans are bound to be raising their eyebrows at the talk of parallel worlds when it comes to side games or spin-off series, even when the games in question share a link. Fans just experienced something like that again just recently with Zero’s trouble getting home after his adventures in Marvel vs Capcom 3 (becoming especially redundant since cross-over titles are always standardly non-canon/omniverse “for funsies” stories anyways). Just like with their comic book partners, Capcom knows that the parallel world concept comes in handy when you’ve got extra stories to tell, and only a loose sense of continuity to work with. (For example, Mega Mission!) In addition to keeping with a time honored tradition of minimizing contradictions and keeping storytellers from writing themselves into a corner, it allows the fans themselves to interpret their own personal canons for maximum enjoyment (or sometimes, frustration)! In this case, it might account for some of the minor differences noted before.

I personally hope that someday we’ll see 2 player simultaneous platformer action on a new home console and via the internet (maybe even in the retooled Mega Man Universe, but I won’t get my hopes up), yet in the meantime the release of Power Battle and Power Fighters (in the Mega Man Collection and Rockman Power Battle Fighters) on home systems in the last decade is still a pretty cool consolation prize. While writing this article I’ve been developing a strong craving to play the old titles over again. I think it’s time for my enemies to once again feel the awesome power of the Giant Knuckle!
KA-POW!!