Just as Blues himself is always one step ahead, Blues week is getting an early start.

The always cool often aloof older brother of Rockman got his start in Rockman 3, introduced as the enigmatic rival character whose power could equal Rockman’s own. But don’t take my word for it! Inafune said this of Blues in the Mega Man Official Complete Works (page 17):

“We wanted people to be unsure of whether Proto Man was a friend or foe. On the one hand, he’d seem like a rival to Mega Man, but at the same time he’d seem like a comrade of sorts. There were so many characters like this in the classic animes of my generation, and that’s where the idea for this character came from. (laughs) We gave him a scarf to add to his ‘cool’ factor, and gave him a shield to make him seem tougher than Mega Man.”

And indeed, tons of possible inspirations for Blues have been suggested, from Astro Boy, Speed Racer, Cyborg 009, Kamen Rider, Kikaider, and many other manga, anime, and tokusatsu television shows.

Some of the earliest concept artwork for Blues also appeared in the Mega Man Official Complete Works, seen below: 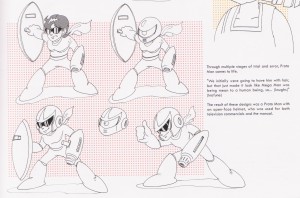 Blues’ first introduction in the instruction booklet of Rockman 3 read as follows: 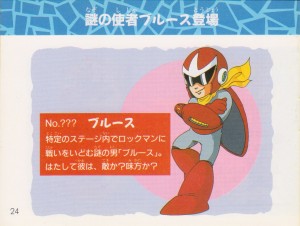 No.??? Blues
The man of mystery “Blues” appears in certain stages to challenge Rockman to battle. But just what is he, an enemy? An ally?

Proto Man didn’t receive any attention in the American Mega Man 3 manual, so those of us on this side of the pond relied on information found in video gaming magazines, like these excerpts from Nintendo Power and the related publication the NES Game Atlas. 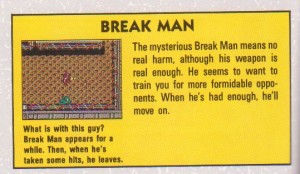 It’s interesting to note that while the Japanese version used the name Blues right away in every encounter except for the “Break Man” stage directly before Dr. Wily’s fortress opens, the American magazines portrayed Proto Man as completely calling himself Break Man up until the revelation that he was Mega Man’s older brother Protoman at the very end of the game. This lead many Mega Man fans to call Protoman Break Man or use the two interchangeably, rather than only using it to refer to his specialized “Joe” style helmeted version. We’ll talk a bit more about the Break Man persona later on.

For the next installments of Blues week, we’ll be looking at the profiles of Blues in Japanese Rockman books over the course of the games, seeing how his portrayal has changed through the years.