Following his starring role in Rockman 3, Blues played a smaller but important part in Rockman 4, saving Kalinka Cossack from Dr. Wily’s clutches and allowing for Dr. Cossack to clear his name. But this good deed would not go unpunished, as Blues himself would now be brought to the forefront of Dr. Wily’s ire in Rockman 5.

5’s story was all about Blues. Take these excepts from the Japanese Rockman 5 manual below:

In the time of 20XX A.D.
Rockman was vigilant in his resolve to stand guard against Wily, but after two months had passed since their last battle, even he was starting to enjoy a brief period of relaxation.
There was still one question that was bothering him, and he decided to ask Dr. Right for help.
“Doctor, just what kind of a person is Blues, anyway?”
But Dr. Right was unable to give a proper answer.
“Umm…”
Just then, they received word from Dr. Cossack with the news that his work on Rockman’s newest support robot “Beat” was completed.
Rockman immediately set out to Dr. Cossack’s laboratory.

Rockman was speaking to Kalinka in Dr. Cossack’s living room when suddenly they received an emergency call from Dr. Right over the TV-phone.
“I was unable to confirm this completely, but an unknown group of robots is attacking the town, and it seems that Blues is their leader!”
“Can it be!?” Rockman hurried back home, but only just in time to see a figure that looked like Blues kidnapping Dr. Right! Why would Blues do this!? But there was no time to wonder about that now, Rockman had no choice but to give chase.

With the safety off and guns blazing, the battle of Rockman vs the mysterious robot army spearheaded by Blues will now commence! 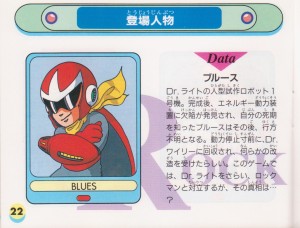 Dr. Right’s very first humanoid prototype robot. After completion, his energy regulation equipment was found to have a defect. After learning of his own mortality and time of death, Blues went missing. Just as his power equipment was on the verge of giving out for good, he was recovered by Dr. Wily, who it seems performed some sort of remodeling. In this game, Blues has abducted Dr. Right and is headed for a confrontation with Rockman, but what is the full truth behind this incident…?

These bits were the first to shed some light on Blues’ background, most of which would not be elaborated upon for another several years until the CFC’s article on “The Secrets of Blues“.

The manual is actually more revealing than what many other books at the time had to say on Blues’ past. Page 21 from the Rockman Daizukan below illustrates some of the confusion Capcom intentionally surrounded the character with to hype up his role as the mysterious villain: 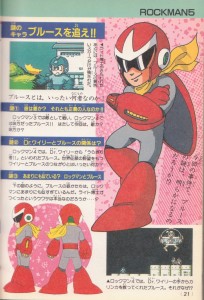 Chasing the elusive character of Blues!!

Just what kind of character is Blues?!
Caption: Blues has kidnapped Dr. Right, leaving only his yellow scarf behind.

Mystery #1: Is he an enemy, or is he a good guy?
In Rockman 3 we battled Blues as an enemy, then in Rockman 4 he acted as an ally! What will he do this time, will he be foe? Or friend?

Mystery #3: Rockman and Blues – Aren’t they just a little too similar?
As seen in the figure below, Blues’ body shape is very similar to Rockman’s. Perhaps too similar? Could the rumors that Blues was built by Dr. Right be true…?

Caption: In Rockman 4, Blues saved Kalinka from Dr. Wily’s clutches. But why!?

This time, will the truth behind the mysteries surrounding Blues finally be revealed!?

The mysteries themselves seem to be from Rockman’s standpoint. American fans may be surprised to hear that in the Japanese version, Rockman has still not been told that Blues is his older brother. But even if he doesn’t realize how closely related they are, at least by the end of the game Rockman finally understands that Blues is an ally that he can trust. Ultimately it was revealed that Blues was framed for his crimes by Dr. Wily’s impostor robot Darkman #4, as the real Blues shows up twice, first to clear his name, and then to save Rockman and Dr. Right’s lives from Wily’s collapsing fortress.

In retrospect, it’s too bad that Blues had to go and get on Dr. Wily’s bad side. Just think, that swanky fortress could have been his!