The Big O. In the giant mecha genre, it’s something of an acquired taste. But it’s been very inspirational. Rockman MegaMix author Hitoshi Ariga penned the manga adaptation, and Big O’s unique Megadeus style was the inspiration for “Big G” Illumina from Infinity Mijinion’s stage in Rockman X6. So if you’re interested in Big O too, maybe you’ll like what’s waiting below.

There are a lot of mysteries in Big O, and I think a lot of the long-time fans are people who love thinking about these mysteries and reflecting upon the potential meanings within. And as much as I enjoy the creative and introspective analysis done by fans, I’ve always been driven to know what the creators’ own ideas and intentions were, what messages they were trying to convey, or whether they only wished to provide food for thought without a story framework that’s set in stone. I purchased the Big O Official Guide, the Japanese published Big O bible to try and answer some of my enduring questions about the series, and perhaps see things from a new vantage point. Here are two pages from the book dealing with the final two episodes of the series: 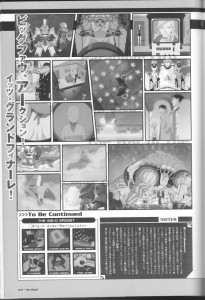 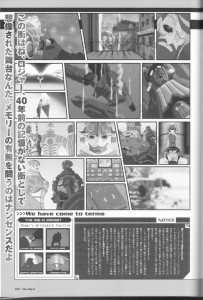 Slumbering in Necromandio, dwelt the monster of the land that craves for memories. Vera, having learned the truth about memories, refused to let anyone else have them if she could not, and set off an explosive charge that awakened the creature. It possesses a head like the Archetype’s and the giant four-legged body of a beast. “If there truly was a being that created this world, I would have to believe he did not grant the right to live only to those who were born in Paradigm. After all, the creator permitted the abominable Leviathan of the sea and Behemoth of the land to live.” Those words once spoken by Vera had incited the awakening, even as it snatched away her very soul.

In order to control Big Fau which had lost its Core Memory, Paradigm Corporation coerced Beck into creating an alternative device. Utilizing R. Dorothy’s memory drive installed into the rear of the cockpit, a new hourglass-shaped Core Memory was set.

The shoulder parts expand to make way for the enormous gun turrets. To combat the flying spheres of light laying siege to the city, Big Fau fires off a continuous supply of ground-to-air missiles.

Angel, creator of the “stage” called Paradigm City, recognized her own existence as a memory and has awakened to return to her former place. Apart from the details like that sinister looking expression and the back portion that resembles Angel’s birthmark, Big Venus appears very much to be the negative image of Big O. Shouldering the role of resetting the world, Big Venus possesses the unique power to erase anything by passing through it.

Concealed in Big O’s chest lies its ultimate weapon gimmick. By protracting the armor between the shoulders and the chest and extending a spherical gun turret from the center of its breast, Big O can fire a colossal energy beam. On Beck’s advice, Dorothy was able to interface with Big O as the key to awakening this stage, while retaining her normal functions. Rather than using the usual joysticks, the Final Stage brings up a new console that fires with a pull-trigger. Also, due to the extraordinary recoil of the weapon’s discharge, the Moby Dick Anchors are dispatched to attach to the surrounding area and keep the body upright.

Arriving at Big O’s garage in small groups, the old men gather. Each is assigned a station, and under Norman’s direction, they repair the battle-damaged Big O. They too are people with memories.

I was glad to learn a bit more about the Behemoth. The massive monster that appeared virtually out of nowhere and received less than 20 seconds of screen time before it was destroyed by Big O and the falling girders of the Paradigm City stage. It was foreshadowed as the counterpart to Act 17’s Leviathan, but the with the quickness that it came and went, that was the first time in my initial viewing that I noticed things starting to feel rushed in the pacing of the series.

Necromandio, from what I can find on the internet, is a name for the underground river in Hades. Which could make the first statement either literal or figurative, as in a real place under Paradigm called Necromandio, or as a metaphor meaning “stuck in purgatory” along the lines of what Gordon had said about awakening the dead in Act 25. Vera’s quote was from Act 23, so I used the English dialog for that part. The last sentence I take to mean that Vera’s soul had become drawn into the Behemoth when she had seemingly killed herself by jumping backwards into the explosion, and that her final speech cursing Paradigm and Roger were those of her ghost within the creature as it was destroyed. Which, admittedly, is weird, but parallel to Schwarzwald’s ghost living inside of Big Duo. So it did help me come to understand bit more of what was happening. One could come up with that interpretation simply by watching the show, but it was not necessarily the only interpretation of the events that were portrayed, so for me it helped to have a skeleton idea to attach the meat to.

Another aspect I was curious to know more about was Norman’s workforce. Being familiar with giant mecha anime, I had already fully extended my disbelief that one man could be a full time butler and cook as well as the only mechanic for a giant robot. So when these guys showed up in Act 24, I knew then that the joke was entirely on me. While Roger monologued about the nature of more than one truth, I really felt the curtain being pulled back on the production, and I had an amazing “Eureka!” moment. Definitely one of the parts I enjoyed most from season 2.

And of course, Big Venus was one of the most sudden and unexpected twists of the series. As a fallen angel, the name of Venus was chosen due to the ancient connection of the planet to Lucifer, as well as its more modern connotations of being female.

For those interested, a few good Big O sites (all past their prime unfortunately) include: