“What the… 5,000 yen for a pocket planner? SERIOUSLY, Capcom? Who would spend that much on something like that?! What are they thinking–”

‡“Along with the daily planner pages, we’ve also included a Research Journal with pages of notes detailing the experiments of Rockman’s father, Dr. Right — published here for the first time ever! These memos can only be found in this exclusive notebook. Revealed at last, Dr. Right’s illuminating insights on subjects ranging from Rockman to world peace are a must-read.”

So, it looks like I’ll be importing the Japanese 3DS Rockman Classics Collection Limited Edition. It sounds as though they could be expanding upon the Right’s Journal segments that appeared in 1991’s Rockman Character Collection, although they could consist of entirely new pieces with no connection to the older ones. Should be interesting to see if they keep or toss the dates and passages listed before, and how far into the series the notes will cover… Just as a prequel story, as if 2016 is the actual year of 20XX when Rock was born? Or perhaps going through the included games up to Rockman 6? Or even beyond R10, and on into X?! They sure know how to kick my imagination into overdrive.

The journal entry on the sample image above reads as follows:

Tuesday August 9
Starting today the six completed robots enter into their safety evaluation period. Rock has even volunteered to oversee their preparation. I’ve built my DRN series upon the firmly held foundation that in order to truly benefit humanity, a robot must be able to peacefully coexist among humans. These six whom I’ve taken to calling my Numbers have been crafted to embody all of my love, hope, aspirations, and goodwill.

While not exactly containing groundbreaking information in itself, I think it’s a very promising example of the kind of world-building background setting and lore goodness that fans like myself love and crave. If keeping with the previous journal info, this entry would be at least 9 months before the events of Rockman 1. You see? I’m already spinning my wheels about it!

In related Mega Man Legacy Collection… I mean Rockman Classics Collection news, it looks like the Museum section in the 3DS version will be getting an influx of new images that will include things sorely missing (and lamented over) from its predecessors: packaging art! 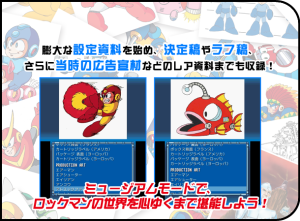 These example images presumably from the game’s Rockman 2 library list several pieces above the “PRODUCTION ART” section, including:

The only available package art in the Steam version for Rockman 2 were the Japanese and European covers, so I’m grinning at the prospect of expanded content for the Museum.

Now I’m curious, is the Japanese Rockman Classics Collection actually including the Japanese versions of the games, or just Japanese menu text as was suggested based on the Japanese language version in Steam/Xbox? Or more amusingly, could it be the US Mega Man ROMs having been re-imported and edited to be localized back into Japanese in a similar vein to how the Rockman Complete Works games were adapted for the Mega Man Anniversary Collection? If Capcom or Digital Eclipse has made mention of the technical side of this, let me know in the comments.

4 Comments to "It was Tuesday"

« How to blog
Higurashi Brings the Classics Back »