As I and the rest of the internet have been falling in love with Ryuji Higurashi’s comics-inspired, nostalgia-inducing Rockman Classics Collection cover art, I was reminded of another piece of his that appeared in one of Capcom’s official artbooks early this year. 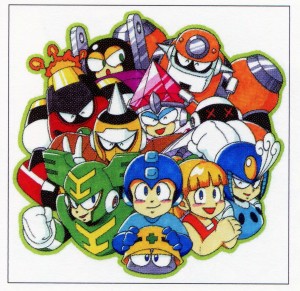 Higurashi was already a huge fan of Rockman even before starting at Capcom at the end of the 90s. He first caught the company’s attention by submitting his fan art to Capcom’s fan club magazine CAP! that was published 2 to 3 times a year in Japan. You can view these early submissions here: [1] [2] [3] [4].

Once Higurashi had been officially hired on, Capcom put his youthful enthusiasm to good use by putting his talents to work on the commercial illustrations for the Rockman Complete Works series of games which ported the first 6 Rockman Famicom titles for individual releases on to the Playstation between August and December of 1999. He’s been a huge contributor to Rockman series art ever since, particularly when they want to achieve that “classic” Rockman style. He did the lion’s share of promotional art when Capcom brought the early 90’s 8-bit look back for Rockman 9, as image above clearly attests to. At the same time, he’s also capable of pushing the envelope, which is why Capcom put him in charge of overseeing Mega Man’s new look for Super Smash Bros 4. And here he is now, 16 years passed from where he started, working on the cover for another Rockman 1-6 collection — just like how it all began.

As he has proven once again, he’s certainly the right artist for the job.

2 Comments to "Higurashi Brings the Classics Back"