Tracking down the pieces that got left out, forgotten, changed or intentionally removed from the Mega Man Legacy Collection.

Since our first real glimpse of it at E3 2015, Mega Man Legacy Collection has undergone several changes during development. I had written previously about how the game was shaping up based on the three livestreams from Capcom Unity which appear to have been deleted from their Twitch account now that the final game has been released. As luck would have it, the first of the three has been uploaded to YouTube by another account and can be seen here.

So what’s changed between then and now? Actually, quite a bit. 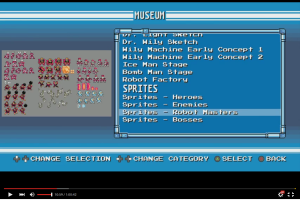 For starters, the Museum was initially going to contain sprite sheets from each game, divided into Heroes, Enemies, Robot Masters, and Bosses. I guess they were removed to save space or because sprite sheets like these already exist all over the internet. 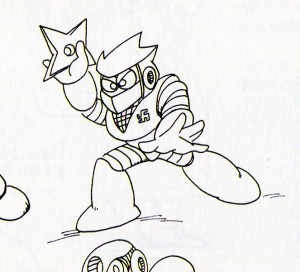 This ninja robot master was probably removed for the presence of a Manji (or Swastika) symbol on his chest.

Both of these characters were in the Museum during the second day of E3 livestreams, and both were probably removed because of the remarks made in the chat about each one. The Manji is a symbol closely associated with Buddhist temples in Japan, but in America we know it primarily as a Nazi standard. 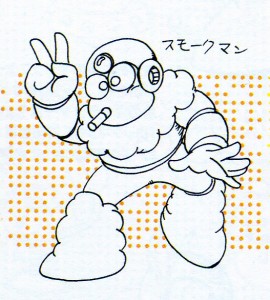 Smoke Man may look pretty chill, but having a cigarette hanging out of his mouth got him banned from Legacy Collection.

I even wrote about the fact that there were two entries labeled Smoke Man and that one of them should be labeled Shout Man in my initial writeup of the events. I wasn’t expecting to see Smoke Man completely disappear. They still kept some Smoke Man concepts from Mega Man 3, so I can only conclude that this one was removed for looking like he’s enjoying a cigarette. Can’t risk being seen glorifying that stuff to kids, so the devs snuffed him out. 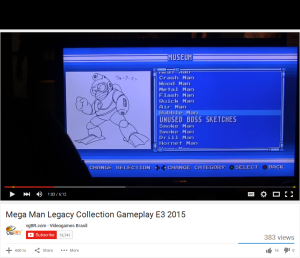 The Museum also contains a few other errors, mostly with labeling. The images of Mega Man using Cut Man’s weapon is labeled “Cut Blade” instead of its official name, “Rolling Cutter.” Also, the images for the Wily Machine form 1 and form 2 in Mega Man 2 have their names swapped (form 2 should be the one with Wily exposed in the cockpit).

One thing I was disappointed to find omitted from the Legacy Collection was the original Mega Man 1-6 NES box art. Some of the images (MM1, 2, and 3) can be seen in the promotional materials in the Museum as thumbnails on scanned advertisement pages. The Museum also includes Eurpean package art for MM2 and MM5 (mislabeled as the US art) without the box or logo overlaid. I’m not sure if they couldn’t find proper resources or if they were consciously trying to avoid showing any references to “Licensed by Nintendo”, but regardless of the cause their omission feels like a large chunk of the Mega Man history is ostensibly missing from this collection. To return balance to the universe, here are some high res scans of the game boxes. 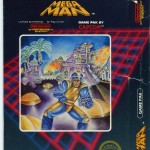 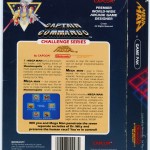 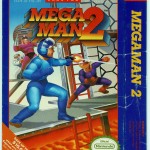 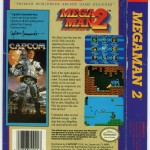 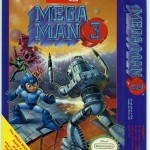 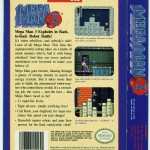 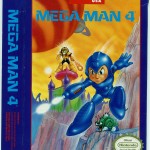 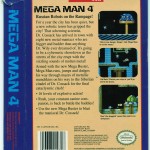 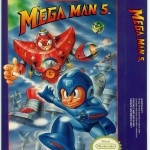 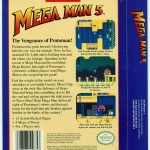 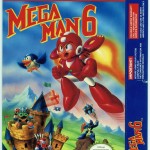 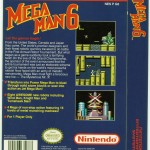 Even though I’ve kept them all these years, my copies are not in the best of shape — one of the reasons I would have really appreciated higher quality versions being included — but I hope you can enjoy them for what they are. Side note, at first I thought I had some stray hairs stuck on my scanner bed when I scanned the front of Mega Man 6. Turns out those are actually printed on the box like that.

Now, let’s move on to the Database. This was a feature first introduced in the Rockman Complete Works series of Playstation ports released only in Japan (but now available on the PSN store). This was the first time those entries were officially translated into another language, and there were some small but interesting changes that took place.

For instance, in the E3 demo build a lot of people noticed that Crash Man’s weakness was listed as Crash Bombs. This was corrected to Air Shooter in the final. 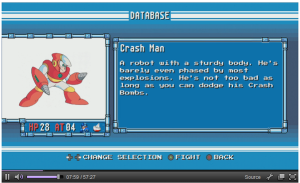 Perhaps it’s a reference to how he was
defeated in the Archie Comics adaptation?

Metal Man’s weakness is also different in the Legacy Collection than it was in Rockman 2 Complete Works. Originally his weakness was listed as Metal Blade, which will famously kill him in 1 to 2 hits (depending on which difficulty setting you’re playing on.) In Mega Man Legacy Collection, his weakness has been changed to Quick Boomerang. While Metal Blade does deal the most damage to Metal Man, you won’t have access to that weapon until after the first time you’ve beaten him so it makes sense to go with another weapon you might be able to use in that first encounter instead. Mega Man 2 is somewhat unique in that the bosses in that game often have more than one weapon that works well against them. Perhaps some would debate this change, but I think it’s a fair swap.

Two entries were changed in the Database for Mega Man 3: the fish submarine Gyoraibo, and the flying Giant Metall. In Rockman 3 Complete Works, Gyoraibo was listed as having 1 HP. However, if you’ve ever tried fighting Gyoraibo with the buster, then you already know it takes 2 hits to destroy. His hit point tally has been corrected to 2 HP in Mega Man Legacy Collection. Giant Metall’s weakness was listed as Hard Knuckle, while in Legacy Collection the weakness is changed to the regular Mega Buster. Hard Knuckle certainly does more damage than the standard shot, but its single use and slow speed means that you’re a sitting duck against the Metalls this behemoth sends out to attack you. You need to be fast on the draw or fast on your feet to dodge their marching barrage. Rapid fire is arguably a better offense, since you can also use it to clear out his sentries. I suppose it’s a matter of preference.

In Mega Man 4, Drill Man and Pharoah Man’s attack points have been accidentally swapped. Drill Man should have an attack value of 8. Pharaoh Man’s should be 6. Complete Works database had this right, but in Legacy Collection Drill has 6 AT and Pharaoh has 8. Easy mistake to make, perhaps.

Some entries in the Database for 5 and 6 were missing. Mega Man should have had an entry in each game, but Legacy Collection only includes his entries for 1-4. Most of them are pretty much the same, but it’s odd they chose not to include them for the last 2 games. They also didn’t include the database entries for Protoman, Rush, Eddie, and Beat that were in Rockman 5 Complete Works, and the entries for Power Mega Man and Jet Mega Man in 6. I might have guessed it’s because these entries were from the Illustration gallery that was in a separate section in the original Complete Works games and therefore might have been overlooked. But they did manage to keep Mega Man, Dr. Cossack, and Kalinka’s entries from 4 which were also in the Illustration sections, so perhaps this was just a lazy oversight after all.

Now, for the Challenges! 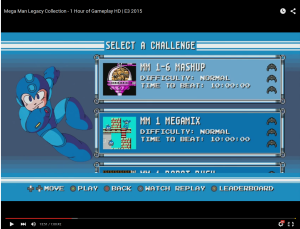 The Challenge runs at E3 were different than the final game.

Not only were the icons for the Challenges different at E3, but the Challenges themselves consisted of different segments. Particularly in the MM1 MEGAMIX and 1-6 MASHUP Challenges shown above. Also the icon for the MM1 ROBOT RUSH featured Guts Man instead of Ice Man.

The E3 build also didn’t include Craig’s Challenge yet. It was designed by Craig Skistimas of Screw Attack, who explained how his Challenge came about on his Twitter.

And a nitpick on the Challenge mode portals: Even with the E3 build they already had the starfields that could be changed into Pipis, meant to resemble the Mega Man 2 Robot Master intro fields. In Mega Man 2, you can change the stars to Pipis by pressing and holding the jump button. In Challenge Mode, you do it by holding the fire button. Not sure if it’s reversed on accident or if they just wanted to change it up a little.

Let’s take a look at the borders. As seen on this early E3 build below, the border images were initially just the Japanese box art with the middle cut out. I think the final ones turned out much nicer. 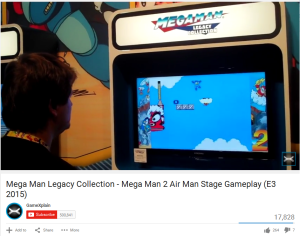 Finally, let’s talk about the Music Player. The song titles and order on the six albums in Legacy Collection are based on the ones from the Rockman Sound E-Can and Rockman Sound Box, using the US names instead of the Japanese ones. The tracks lists for the NES/FC songs are mostly identical except for the following:

Rockman 1 CD: 17 tracks. Legacy : 16 tracks. The CD has a track for Wily’s UFO sound effects that Legacy does not.

Rockman 2 CD: 26 Tracks. Legacy: 24 tracks. The CD has 3 sound effects tracks Legacy does not, including Wily’s UFO, the Last Stage (acid drop sound effects), and for when the Alien is destroyed (the sound of the hologram projector blowing up). Legacy splits the Staff Roll and Credits into two separate tracks, where it’s only a single track on the CD.

Rockman 6 CD: 26 tracks. Legacy: 24. The main differences here is that Legacy includes only the US MM6 Opening song, while the CD also includes the Japanese version. Also, the Ending track is omitted. This is probably because the Ending in this game was very long and contains melody samples of all 8 robot master samples. I believe in the Rockman 6 Complete Works game it was divided into 10 different tracks that play in successive order. If that’s also the case in the MM6 ROM, then that’s probably why it’s missing here: They could either have the ending song in 10 different parts, or not at all — so they chose not at all. Too bad, it’s a nice song.

I think that about wraps it up. If you saw something I didn’t, please share your knowledge in the comments. And remember, even if this post seems focused on things they didn’t do or got wrong, this collection does do a thousand other things right. Let’s give credit where credit is due. Thanks for reading!

13 Comments to "The Lost Legacy"

« Legacy Collection: A “Short” Review
New Leader of the X-Hunters? »

What kind of girl is Tron Bonne?
Retro Ads
Happy Halloween
I think this is awesome.
Sketch to Screen – Death of A Player