Last Saturday was the Day of Sigma (Japanese version), and once again I kind of forgot all about it. Oh well! I’m sure Sigma isn’t losing any sleep over it. He doesn’t care if some puny meatbag humans don’t remember what day it’s on… 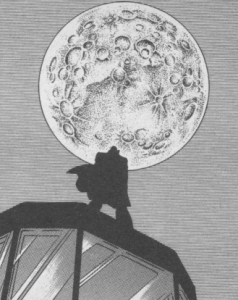 ….Um. I mean, he’d probably prefer we all go eat some powdered bleach or whatever… 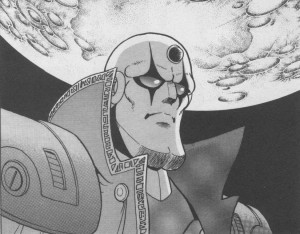 …anyway, it’s not like he’s the type to hold a grudge or anything… 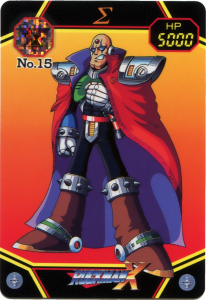 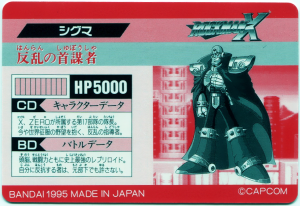 Character Data: Commander of the 17th Unit that X and Zero belong to. Now harboring ambitions of world domination, he has become the leader behind the revolt.

Battle Data: As far as intellect and combat ability, he is the strongest repliroid in history. He shows no mercy to those who oppose him, even his former subordinates. 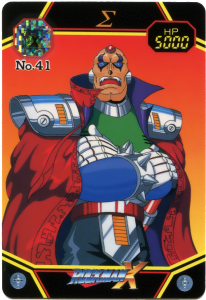 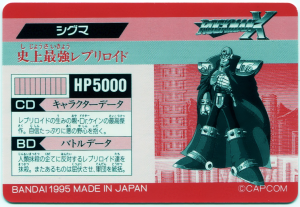 Character Data: The supreme masterpiece created by the very father of repliroids, Dr. Cain. His confidence in his wicked aspirations is completely unwavering.

Battle Data: Obliterates any repliroids who would stand against his extermination of the human race. Also controls an army of followers subservient to his will.


So there we have it, Sigma’s Carddass profiles. If I had to guess I’d say the art for card #041 was probably outsourced to Bandai’s art team, who may have assumed that Sigma’s chest plates would be symmetrical and so drew the three horizontal lines where the circular gem should have been. 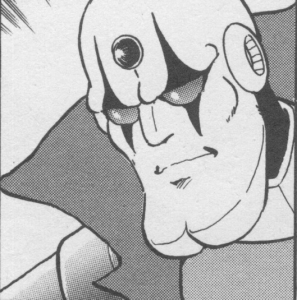 Uhhhm. Not satisfied yet, I take it? Alright, no problem! Let’s kick it up a notch. 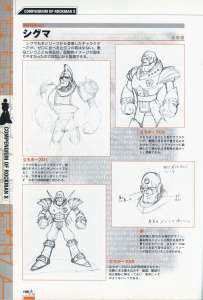 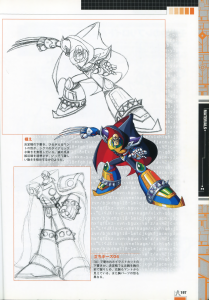 Sigma is another character who has appeared since the beginning of the series, but compared to Zero he went through far fewer rough drafts. They are sometimes just referred to as “the villain”, but we were able to piece together their common lineage by comparing the images.

Standing Pose 1
A rare rough sketch of Sigma. His head boasts crest-like mohawk parts instead of the skinhead design. The rough outlining on the lower half of the body denotes that this was probably a very early stage in the design process.

Standing Pose 2
His form is very clear and distinct in this rough sketch. From how so many of the details are established, it’s easy to guess that this was a very close Sigma candidate.

Standing Pose 3
This seems to have come from roughly the same point in development as Standing Pose 2. The details on the right side of the chest, abdomen and hips have changed to a more familiar shape but still have a few differences. The spiky parts protruding from the back are present as well.

Face
What appears to be the finalized design of the face. Details relating to standardizing the character’s image have been jotted in the margins. There aren’t too many notable changes from Standing Pose 2 and 3, so you can tell his image has taken on a concrete form.

Margin Notes:
-Appearance is a bit older
-Nose is non-aquiline
-Chin is large
-Height is approximately 1.5 times as tall as X

Active Stance
A draft of the final version. The form of Sigma’s cape billowing expresses a feeling of dynamic movement. Those iron claws are suggestive of intense close-combat action.

Standing Pose 4
Looks like a cut rough draft of the illustration used in “X”? In the final version the left arm is clenched into a tight fist in front of his chest, while the right arm is partially visible under the cape. Again the chest parts are slightly different.

And there we have Sigma’s rough origins. It’s a little odd to have that X2 Sigma body right in the middle of a bunch of pre-X1 images, but it’s interesting. I like the pupil-less look of the eyes on the black and white X2 sketch version more. 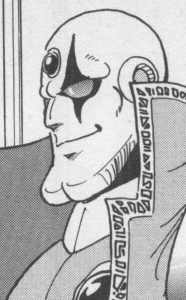 Hey, you like that? Yeah, well I bet we can dig even deeper, too! Like it’s come to many fans’ attention that Sigma’s features bare more than a passing resemblance to the main bosses of Street Fighter series. It’s so prominent in fact that back when U-Capcom put up an online quiz promoting the Irregular Hunter X PSP game, question 5 was to identify which one of these characters was Sigma!

So were these two Street Figher II villains, Sagat and Vega (M. Bison), exerting aesthetic influence on the design of Sigma?

Keiji Inafune said that wasn’t the case back in this 2008 Q&A on Capcom-Unity:

4) What was the inspiration for Sigma?

KI: Some people think he might have been inspired by Sagat from Street Fighter because of his look, but that’s not actually the case. Sigma and Zero basically represent the idea that nothing is absolute. Sigma was a powerful leader of the Maverick Hunters but after Zero passed the virus to him, his allegiance changed. Circumstances can change anything, and nothing is absolute.

Well that tells us about the thematic symbolism of his character, but not so much the inspiration of his physical characteristics. Luckily, a great deal of them are easily identifiable from the 1970s anime Neoroider Casshan’s Braiking Boss: A giant bald muscle man with a mark in the center of his forehead, a large chin and distinctive markings around his eyes. A red cape that gets tossed aside dramatically before the final battle. Spiky protrusions coming up from the behind the head (here from his hat). An energy shot fired from the face. A trademark symbol to brandish on one’s army of robots, and a combat ready mechanical wolfhound as a loyal pet. As Braiking Boss’ body disintegrates, you can even see a circular dial on his left breast and a series of horizontal stripes along his right. Sigma’s facial details like having a straight nose and cleft chin may have been purposefully done to differentiate the two. 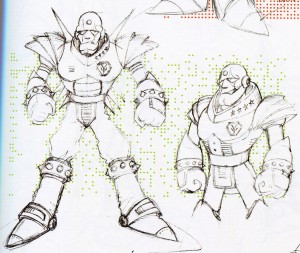 The early drafts with the row of stars along the collar, the jodhpurs with long tight boots and jagged shoulder adornments were probably meant to invoke the impression of a Nazi officer uniform, a classic mainstay of fascist fashion. Also shown in the rough images is his original cobra standard, shown with higher clarity in the R20 artbooks. A little serpent symbolism to mix in to our haphazard biblical references like “Cain”? 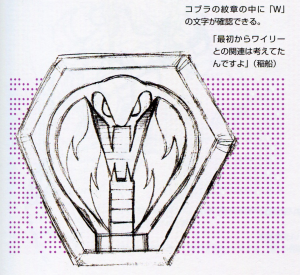 R20 also shows that in very early concepts, the main villain would have been an evil trio rather than a single entity. There are two pre-X1 sketches with varying takes of an evil team consisting of a tall guy, a fat guy, and a short old guy. (To say nothing of the hero also being a mix of Casshan, Rockman, and Zero with a large 70’s upturned collar and a “C” on his left breastplate.) 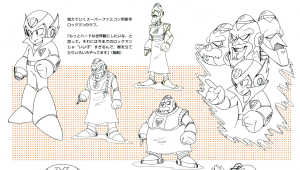 Stylistically these three could well pass for Sigma’s (butt-ugly) relatives. Also worthy of note is that they each have glassy domes on the tops of their heads in this draft. Could they have been planned to be humans whose brains have been implanted in a robot’s body, like Hakaider or Dr. Gero? Along with the “W” in the mouth of the snake symbol that was stated by Inafune to be be representative of a direct connection to Dr. Wily, it seems that even very early on they were considering Wily’s mind in an elderly robot body to become a main antagonist in the series. One can’t deny that Wily’s contribution with the virus is probably the single greatest catalyst of evil in the X series. Perhaps the real serpent in this scenario is Wily and his computer virus! 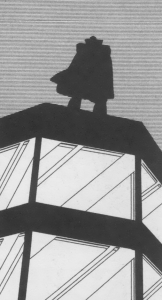 Err, of course, Sigma’s totally the embodiment of all that is evil too. Worse than that. He’s the biggest baddest villain of all time! No question. 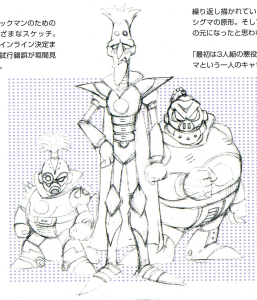 In this second draft the trio becomes more distinct, and the growing resemblance to X2’s Counter-Hunters (X-Hunters) is far easier to identify. Inafune noted that these designs were blended together to become the Sigma we know, but all that really strikes me as familiar are the capes, possibly the shoulders on the tall one and the chest vents and codpiece on the fat one resembling Sigma’s own somewhat. 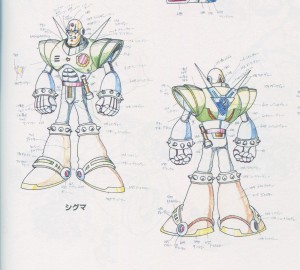 The artbook R20 laid out Sigma’s final design in great detail, right down to the bottoms of his feet. 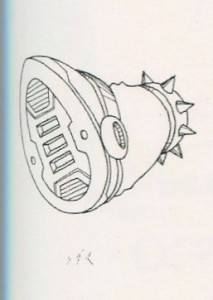 We can even admire his wide range of expressions: 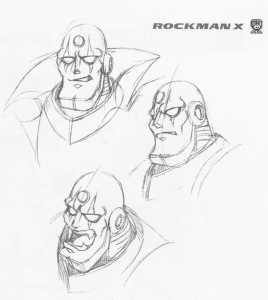 Yes, Sigma certainly has a striking and memorable countenance. 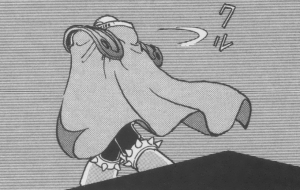 Okay. Okay, good. I think he’s gone. In that case, I think that about wraps up this commemorative look into Sigma’s serpentine origins. See you next time when we — 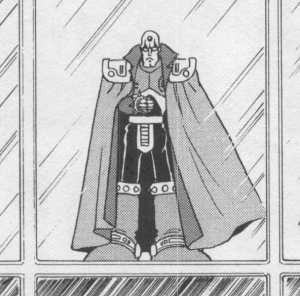 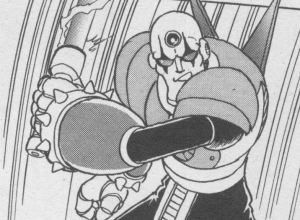