We already looked at the front inside flap of this jacket cover a while back, and today I’m going to show off the underside of the Rockman DASH 2 Final Digouter’s File. It contains 5 rare sketches to do with the game’s many heroines. Read on!

Forgive the less-than-awesome image stitching on this one, guys.

SUPER-SECRET!!
For all you lady-lovers out there, here’s a
Special Supplement!!

The far left picture is labeled simply Operators, the Japanese term for Spotters. None of these designs were used from what I can tell.

Next is Roll’s Maman (which is French for mom). Here are some of the scribbled notes that I can decipher:

Roll’s Maman
Disguised as a Reporter

Her body’s age is about 31 years old. By some unknown force she hasn’t aged as much.

There’s a fastener clasped to her neck (I don’t know what you’d call it). I was thinking perhaps when she’s by herself she loosens the fastener a bit.

To Kawano-san,
In the scene where she uses the microphone, did you want her to be seen when her voice booms from the speakers across the ship? Or maybe her voice could be coming from the television crew’s tape recorder?

The last bit is a note from the artist to Yoshinori Kawano, the director and script writer for Rockman DASH 2. Much of her outfit and even her hairstyle were changed completely from this early draft (plus, that “fastener” became a sort of necktie). Compare to the final design as shown in the DASH 2 Capcom Special Selection booklet: 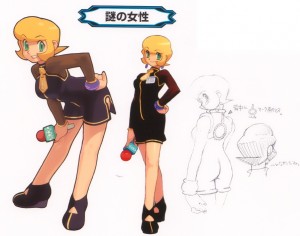 Moving on, in the middle we have the image that was used for the cover of the DASH 2 Complete Capture Guide, with Rock being swarmed by other characters, including the four leading ladies of the game.

Next, also appearing very different from its final version, we see a rough sketch of Tron in her reporter garb. Again, some designer notes:

I pictured Tron as a real hard-hitting, nose-to-the-grindstone reporter who would always get to the bottom of things and never let a juicy story slip past her. She has a scarf for some reason. She should have 6 other disguise patterns as well, but I don’t know what they will be yet. (Hurricane Tron, Cutey Tron?) By the way, the only ones this disguise would fool are the kobuns.

The scarf, hat, baggy pants and camera were all dropped in favor of the sleeker, more sophisticated design shown below. At least they kept the glasses! 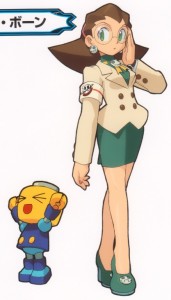 Finally, at the far right, we have a sketch of Shu with her laundry basket, plus Appo, Dah, and a piggy frolicking in the background. For some reason, that’s probably my favorite out of all of these. 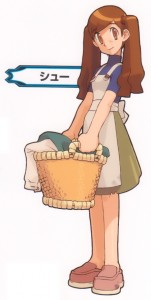 Shuu’s design hasn’t changed at all from that sketch. But then, why mess with such perfection?

Another Day in the Life of a Servbot
Free Quint Friday
Filler Fun
The Siberian Citadel — they don’t build ’em like that anymore!
The Lady, the Scoundrel, and the Gun