The Rockman & Rockman X Daizukan, or what I call the Big Reference Book, was one of the first Japanese books to enter my Mega Man collection back in the late 90’s. Before I happened across it on eBay, I had no idea that such a book had even existed. A book about a video game series, that isn’t a strategy guide? (Or even a novelization?!)

While it covered some 13 Rockman games in total, you’ll find no tips and tricks, no maps and cheats, no stats and strats… No, this book was wholly focused on art, characters and story elements. There were pictures… so many pictures! Those of us who grew up with only the American game packages and manuals never imagined there could be so many. It even contained a mini-comic inside, and on top of everything else, it was in hardcover.

It was like no other video game book I had ever seen, so when asked to describe it, I could only say it was more like an encyclopedia, or on the order of one of those source books for role playing games that just gave you character and background information for creating your own adventures. We started calling such books “source books,” a term that stuck for a while I guess. It really wasn’t the most accurate, since the book itself doesn’t really contain the kind of rules and uniform structure that role playing source books should. It’s just that back then, the very concept seemed so completely foreign to us that we struggled to grope for a comparison.

Nowadays, video game art books are big sellers. Thanks to Udon, we can all enjoy books like the Mega Man Official Complete Works and the upcoming Robot Master Field Guide, in the comfort of the English language. But this new regime of art book mania has clear roots in publications like this one from Kodansha’s Manga Encyclopedia series. Back in Japan in the early 1990’s, these were the undisputed kings of printed fan materials, paving the way for all the game art compilations to come.

And with that long and over-hyped introduction, I present 6 pages from this great old beat-up worn-in book of mine.

We’ll start with pages 42 and 43. Remember, they go from right to left (and in this first one, it actually makes more sense to start at the bottom-right and work your way up)! 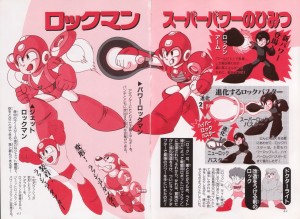 The Secret of Rockman’s Super Power

Rock from before he was remodeled

“Rock” was the human-type robot Dr. Right developed, designated #1. Created to be a peaceful household robot tasked with assisting his creator, he was treated as if he were the Doctor’s own son.

To combat the forces of evil, Dr. Right reluctantly converted “Rock” into the fighting robot “Rockman.” Since that time, “Rock” has been strengthened and refitted many times over the course of his adventures, most recently achieving new heights of power though the use of the Rush Adapters.

The Evolution of the ROCK BUSTER

Enemies crumble before the strength of the trusty Rock Buster. It’s been powered up 3 times so far, its evolution culminating in the Hyper Rock Buster!

This incredible new technique arrived on the scene in “World 5”! By channeling massive stores of energy into his arm, he can really pound the enemy!

Power Rockman
Using this Adapter, Rockman can charge solar energy for use in a devastating punch attack.

Jet Rockman
The boosters on his back provide a powerful jet propulsion for soaring through the air. He can even perform sudden vertical climbs!

*Rush the dog transforms with a Rush Adapter, then merges with Rockman to change into Jet Rockman or Power Rockman.

You might be surprised to see that despite the focus on artwork, much of the book was in black and white (or black, white and red). Few pages were in full color, and many of the pieces themselves would have text or other art laid over them. Compared to the Mega Man Official Complete Works book, you might well find its layout to be primitive and sloppy. It’s something you expect more from old video games guides, where art clips or screen shots might be cropped or overwritten to fit and fill the pages, but not to serve as the central focus of them. While I prefer the MMOCW’s approach with its crisp fully-colored clarity, I feel like there’s still a nice quality to be said for the layout of this book, something that makes me nostalgic for old computer game-based guides. And remember that at the time this was one of the best that had yet been done, and was certainly the single most comprehensive Rockman book of its era, next to the other Rockman Daizukan paperback book that had just come out the year before.

Here’s another set of pages spanning 46-47 (that I didn’t put together very well, but hey I’m still new at this): 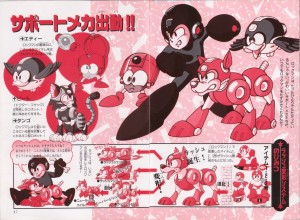 Support Mecha at the ready!!

Rockman isn’t fighting alone. There’s many adorable support mecha that are always at the ready to provide Rockman some backup!

Eddie
A transporter who delivers all sorts of helpful items to Rockman during his quests.

Beat
A robot built by none other than Dr. Cossack! He attacks by swooping in on the enemy.

Tango
This cat-type robot specializes in taking out low-lying enemies below Rockman’s position!

The Secret of Rush’s Transformation System
Rush was developed based on Items 1, 2, and 3 which appeared in “Rockman 2.”

Rock: Rush, you always come through for me, don’t you boy! Thank you! I wonder what kind of transformations you’ll have in store for our next adventure? They’re sure to be wonderful!

After going over the EXE versions of the support characters last week, I felt like focusing some more on the originals. But then I wound up getting nostalgic over the book I was going to post from, and we wound up here somehow!

This book’s coverage ends before Rockman 7, so there’s no talk of the Rush Bike or Super Adapter here. For the same reason, you won’t see Duo or Rightot (aka Auto) mentioned in this last section. I give you pages 54 and 55: 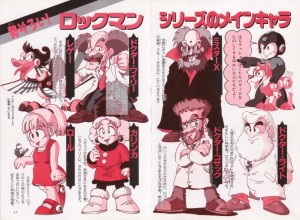 Line-up!
The Main Characters of the Rockman Series

Rock: Look, Rush! It’s all the nice people from our game!

Dr. Right
A remarkable scientist who develops robots to benefit all mankind. It’s he that created Rockman.

Dr. Cossack
The brilliant scientist that was once forced into fighting Rockman for the sake of his dear kidnapped Kalinka. He’s a good man at heart.

Kalinka
Cossack’s daughter, who dreams of becoming a real princess. She was once abducted by Wily.

Roll
DRN002. A household robot, she’s like a little sister to Rockman. Cooking and cleaning are her specialties.

Mister X
The chairman of the X Foundation that came to the aid of the World Robot Alliance. But…… doesn’t he look strangely familiar?

Dr. Wily
Though defeated by Rockman time and again, this evil scientist never gives up his mad schemes for world domination.

Reggae
Wily built this support mecha to stave off his own loneliness. This noisy thing never shuts up!

*Reggae appears in “Rock Board.”

I still chuckle at how silly it looks, having Rock talk about all the “nice people” while you’ve got him pointing directly at “Mister X.”

There’s probably a lot more they could have said about each of these characters, but the interesting thing about this book is that every boss and minor enemy gets exactly the same level of biographical info that these main characters received. Hundreds of profiles on minor characters that you might never have even taken much notice of in the games, each getting their own turn in the spotlight. Now that’s something.

There’s still over a hundred more pages in this book to explore, but I think that’s enough for today.

Thanks for coming with me on this little nostalgia trip. I’m saving up something that’s even older for this Friday, so come back then if you’re craving more of the same!