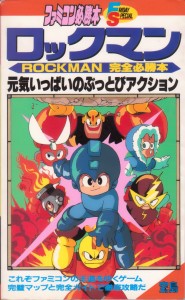 The Famicom Hisshoubon Friday Special #64, to be precise!

I promised something older, and this is about as old as it gets for Rockman books. The Rockman Kanzen Hisshou Bon (that I call the Rockman Total Winning Handbook) was drawn up in 1987 and officially released on January 17, 1988, exactly one month after the first Rockman game. It is one of the very earliest, if not the first video game guidebook to be devoted entirely to a Rockman game. Let’s take a look!

To start with, here’s the back cover and the under-the-dust-jacket cover. The images used here sadly comprise the only original art to be found in the guide. 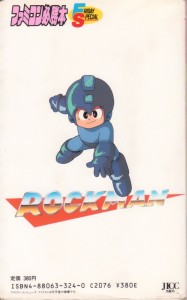 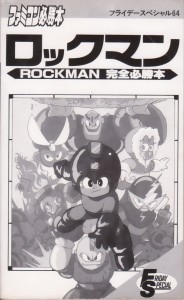 I’ve picked out a few other pages to share with you guys, too. First, the introduction and contents on pages 1 and 2. 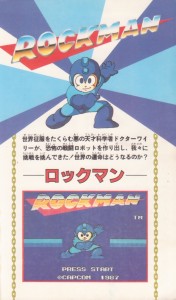 Scheming for total global domination, the evil genius scientist Dr. Wily has constructed a horde of dreaded battle robots to challenge any who defy him! What will be the fate of the world? 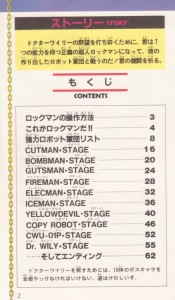 To foil Dr. Wily’s ambition, you’ll take on the role of the amazing hero Rockman, using your 7 incredible powers to do battle with his Robot Army. Good luck, we’re counting on you!

To defeat Dr. Wily, you’ll have to conquer all 10 of the bosses. The road to victory is long!

I think those pages really sum up how much story it was felt a game needed back in those days. “You are the hero! Defeat the bad guy! What else is there?” Gotta love it!

Up next, here’s a snippet from the “This is Rockman!” section which outlines those seven incredible powers, which here are called “transformations” rather than special weapons. I’m not going to translate this whole page (come on, you guys ought to know what these do by now), but I will point out that both of the weapons shown here are misspelled/mislabeled. The Ice Slasher is “Ice Lasher” (or “I-Slasher”), and the Magnet Beam… Well, I guess they had no idea what to call that, because here it’s written as “Magic Power” and everywhere else in the book it’s only referred to by the letter “M”. 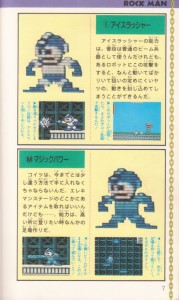 I mainly just wanted to show off the full glory of those close-up Rockman images! Which seem do have involved taking a photograph of a television screen at point blank range and then cutting around the edges of the image with an X-ACTO knife. These graphic department guys really had to work in those days!

One last thing I wanted to share, the pages on the game’s ending. Now, it’s a rare thing to find a Japanese player’s guide that doesn’t dump out on the final boss fight, leaving it for the player to figure out on their own. Even fewer books go ahead and spoil the entire ending for you. This one does both! (Yet somehow, it still doesn’t tell you about the pause trick…) 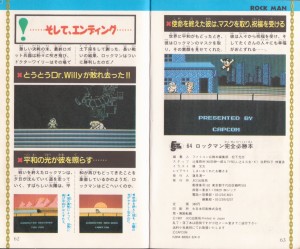 After a furious final showdown, the final robotic weapon was smashed to bits, as Dr. Wily himself groveled on the ground, begging for forgiveness. At the end of this long battle, Rockman had won!

Dr. Willy was defeated at last!!

As the first light of peace shone down upon him……

With the battle now ended, Rockman ventures out into the sunset. The radiant sun is a shining symbol of the peace that has returned. But where is Rockman going?

Thanks to his courage, peace has been restored in the world.

With his quest fulfilled, he is rewarded with the sun’s radiant light.

His mission complete, he removes his mask and receives the world’s gratitude.

Having returned peace to the world, our hero can now remove the mask of Rockman and show his true face. He is met with praise and thanks, as all the people near and far cheer out in happiness…..

Casting off the “mask” of Rockman… Perhaps this is a good time to mention that this book never says that Rockman himself is a robot. He could just as easily be a human (even you, the player!) outfitted with a high-tech armor, the way he’s regarded here. Roll and Dr. Right aren’t acknowledged as such in the game’s ending either, they’re just people out to bestow their blessings upon the hero for saving them. You may also have noticed that they spelled his name “Dr. Willy” on page 62. It’s actually written that way throughout the entire book! The only time it’s spelled as “WILY” was on the table of contents. If you ask me, all those quirks just make this guide all the more special.

Hope you enjoyed checking out this ancient piece of Rockman history. Come back on Monday for… Well, I don’t know what yet, but it’ll probably be something old too. Just not quite this old!

6 Comments to "The Friday Special"