The “Spring forward” of daylight savings left me a bit jet-lagged yesterday. Our annual one-hour leap into the future inspired me to take a look at another time-displaced character. You know him, you’re confused by him (and he’s just as confused himself): It’s Quint!

That’s right, today is all about that evil brainwashed Rockman of the future, and how he came to be.

To get to the heart of Quint’s future-past, let’s start with the Japanese manual for the game in which he first appeared: Rockman World 2. 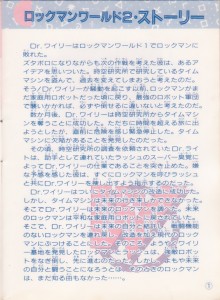 In Rockman World 1, Dr. Wily was defeated by Rockman. Even with this crushing defeat, he was already planning his next scheme when he came upon a devious idea. If he could get his hands on the time machine that was being developed at the time-space research laboratory, he thought he just might be able to change the past. Yes! If Dr. Wily could return to the time before he first started his rebellion, back to when Rockman was still just a household robot, and launched a surprise attack using his strongest robotic forces, there would be no way he could lose!

Several months later, Dr. Wily had succeeded in stealing the time machine from the time-space research lab. He had wanted to set out immediately on a trip across time, but had to put an emergency brake down on his plans when he discovered that the time machine had a serious flaw.

Meanwhile, Dr. Right had been dispatched to the time-space laboratory to investigate. With the help of Rush’s super-sense of smell, he was able to deduce that it was none other than Dr. Wily behind the theft. Having a bad feeling about the incident, Dr. Right quickly called upon Rockman and Rush to search out Dr. Wily’s whereabouts.

Before long Dr. Wily had finally managed to modify the time machine. However, the time machine could now only travel into the future and back, not into the past. Dr. Wily modified his plan and decided instead to spy on Rockman’s future. He found that in the future Rockman had been reset back into a peaceful household robot. Recognizing this chance, Dr. Wily conspired with his own future self to bring this battle-functionless Rockman back in time and alter him to make him fight against the Rockman of the present. Back in the present time, Rockman and Rush were finally closing in on Wily’s fortress, mowing down even the strongest enemy robots in their path. But little did Rockman know that he’d soon be facing off with his own future self……

Towards the end of the manual, we finally catch a glimpse of Quint on page 27: 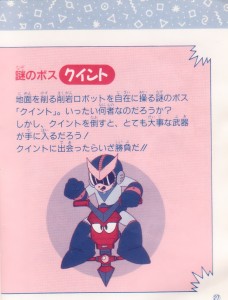 The Boss of Mystery
Quint

The mysterious boss “Quint” who skillfully operates the rock-drilling robot that can pulverize the ground. Who on Earth is this guy? If he can be defeated, one could obtain a very important weapon!

An encounter with Quint is sure to be one decisive match!!

While Quint is only heavily implied to be Rockman’s remodeled future self here, other bios like the one found in Rockman 7 & Rockman X3 Ultra Encyclopedia on page 54 make the connection clear and add a little more to the story: 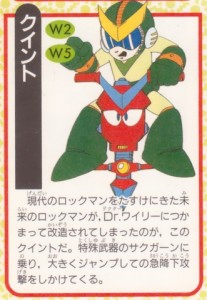 Quint is the Rockman of the future who came back to help the present-day Rockman, but was captured and remodeled by Dr. Wily. Riding atop his special weapon the Sakugarne, he can attack by jumping high into the air and dropping down on top of his opponents.

Putting it all together now, the Dr. Wily from the present era traveled into the future and met his future self who had previously given up his evil ways, and convinced him to help trick the future Rockman whose weapons had long been removed into coming back into the past to help his past self (somehow) during this time crisis. Yet instead, the Wilys’ trap was sprung and future Rock was changed into Quint and made to fight his past self. Take a minute to digest all of that, and we’ll continue.

As the Rockman of the future, Quint doesn’t have his own Rockman Killer serial number like the other Game Boy series bosses. He also wasn’t given any internal weapons, so instead Quint attacks using a helper mech called Sakugarne, a play off the Japanese term sakugan (削岩) which refers to a rock cutter/shaver/driller.

The Rockman & Rockman X Big Encyclopedia of Secrets has a little more about the Sakugarne on page 24: 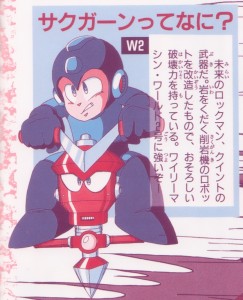 What is a Sakugarne?
W2

The weapon of Quint, the future Rockman. Being a remodeled jackhammer robot that is able to smash solid rock to pieces, it possesses a dreadfully powerful destructive force. It is strongest against the Wily Machine World 2!

In fact, since you only acquire the weapon just before the last stage of the game, the final boss fight winds up being just about all the Sakugarne is good for.

So, how does the Japanese Quint tale compare to other “Mega Man II” versions of the story? Let’s check the U.S. instruction booklet! 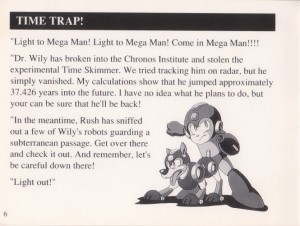 Unlike the Japanese version, the U.S. (and other European versions, like the Spanish manual that can be downloaded from my awesome affiliate Rockman Perfect Memories) gives a very specific amount of years into the future that Dr. Wily traveled: 37.426 years to be exact. That’s around 37 years and 5 months.

Or, if you go by European usage of periods in long numbers, that would be over 37000 years. Now that’s a long time.

These manuals also provide more imaginative names for the time-space lab (the Chronos Institute) and the time machine itself (the Time Skimmer). It even included the parts about Rush sniffing out Dr. Wily’s hideout.

But you’ll notice there’s something pretty significant missing from these stories: any mention of the future Mega Man. Actually, Quint isn’t mentioned in the US/Euro manuals at all! At least he got a short mention on the back of the box, but you’d probably never guess he was Mega Man’s future self just from reading it. 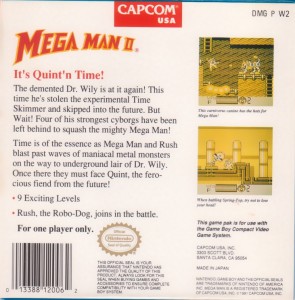 The “ferocious fiend from the future!” Could he be the distant future’s greatest evil warrior looking to challenge the past’s mightiest hero? Or a robot Dr. Wily made using advanced future technology? Was his pogo-stick actually a time machine for “hopping” into the past or future? I can still remember gathering with my friends and coming up with all sorts of different background stories for him when we were kids (and him being Mega Man from the future but captured and remodeled by Dr. Wily was never one of them). The truth was far wilder than anything that we had ever imagined.

While the forgotten tale of Quint did circulate the English-speaking internet, it wouldn’t be for another decade until most international Mega Man fans were finally exposed to that aspect of Quint’s background story in his Mega Man & Bass CD database entry. It sure turned some heads, too!

Not only that, there was a lot of confusion going around over what Quint actually looked like! On the box art itself and on the art for page 48 of Nintendo Power #34 seen below, Quint(et) was colored primarily red, with black, gold, and silvery-white detailing. His Sakugarne is also without its eyes, making it appear more like a “device” or weaponized vehicle than a helper robot in its own right. 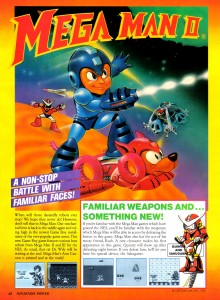 Suffice to say, Quint was characterized pretty differently outside of Japan. Perhaps Capcom didn’t think that this cockamamie story about Mega Man battling his own future self would fly with an international audience.

Some have a stranger theory as to why he wound up so changed–to hide his similarities to the Mega Man of Captain N: The Game Master. Airing Saturday mornings, the show ran from ’89 to ’91 in the United States, and featured a tiny green version of Mega Man that had a dark blue visor and a yellow Mega blaster located above his wrist. Some believe Quint’s design could have been inspired by Captain N. Compare for yourself: 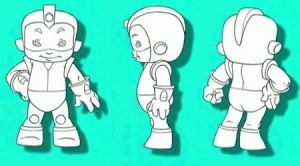 There’s Captain N’s Mega Man design for the first and second season of the show. I’ve collected this front, side and back view from the DVD extras. (Yes, I’m not ashamed to say it. I bought the DVD box set!) 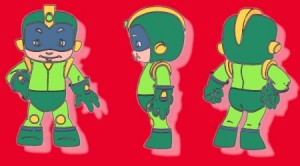 This is the same image that I inverted and colored using his in-show palette to provide a better example.

And now for Quint:

The most striking similarities include the green-on-dark green color scheme with the blue visor and golden trim. Other things like the v-neck and the yellow strip on the helmet and wrists are a little similar, but have their own differences too (like the helmet strip being introverted on Quint, and having an entire bracelet around the wrist that doesn’t fire a weapon). Fans of connecting the two also point out that Quint atop the Sakugarne bears some small similarity to the hover scooter Mega Man is seen riding in during the cartoon’s intro. 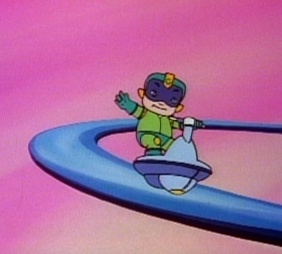 It is interesting that they decided to give Quint a boulder-launching jackhammer to ride on rather than a more standard Mega Man weapon. One of the reasons that has always been cited for renaming him Mega Man in the U.S. was because Americans would associate the name “Rock Man” with geological rocks, rather than the rock music genre which was intended. If Quint is a Japanese sendoff of the “Americanized” Captain N style of Rockman, is his weapon of choice also a play on that cultural viewpoint of a Rock Man that utilizes rock-based attacks? That would be some coincidence.

How about the name “Quint”? By itself quint is Latin for 5 (as it is in many of the Romance languages). Many believe it follows the general Rockman character naming convention of having to do with music, like the above Nintendo Power that actually calls him “Quintet” as in a 5-part musical group or harmony. Other musical possibilities include “quintuplets,” a series of 5 quick notes that take place over a single beat, or “quint drum toms” used by marching band percussionists. I like the idea that it’s a reference to the rare “5/4” time signature used in sheet music, which I think kind of parallels his own existence as a kind of awkward extra step out of time, if you will. I’ve also seen it suggested that Quint represents Wily’s fifth chronological attempt at world domination (after Rockman 1, Rockman 2, Rockman World 1, and Rockman 3. Rockman 4 actually came out before World 2, but many fans feel that R4 takes place after it.)

Regardless of why he was named, Quint poses a unique problem to the Rockman storyline (or several, depending on how nitpicky you are with time travel paradoxes in fiction). Is Rockman destined to one day be kidnapped by Dr. Wily and returned to the past? Or has Dr. Wily’s meddling in time changed everything, making Quint the lost child of an alternate future dimension? The long and short of it is, we don’t know. Capcom hasn’t said a word!

And what exactly is Quint’s own fate? He was last seen teleporting away after being defeated in World 2, but went on to appear in other titles like Rockboard and Rockman World 5. Some speculate that the real Quint may have returned to the future after World 2, and these other appearances of Quint are merely copies or restored backups. Others believe that Quint is still evil and still around in the present, and that he may someday appear to battle Rockman once more. And then there’s Rockman Shadow who is said to be related to Quint somehow, but… well, that’s another subject entirely.

When it comes to Quint, there are way more questions than there are answers. It’s no surprise that even Quint himself struggles with grasping his own time paradox. Will we ever have the answer to the riddle that is Quint? Perhaps, in time…