There have been a lot of rumors and a lot of speculation about a potential new Mega Man Legends game recently! Servbots are becoming all the rage thanks to Dead Rising 2, and on top of that, Tron Bonne recently made a splash as a confirmed character in Marvel vs Capcom 3. Therefore, I think it’s about time I get in on the hype and give some more focus to the Legends series on the blog. And who better to start with than the queen of mecha herself?

From the Rockman DASH Capcom Official Creation Material Collection Great Adventure Guide (which is definitely in the running for the longest Rockman book title ever): 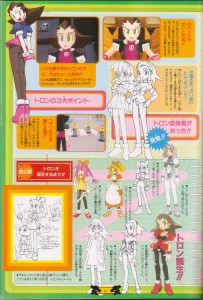 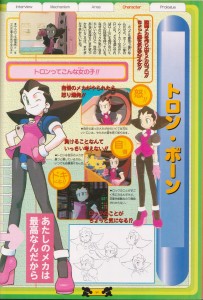 Relentlessly stubborn and determined, Tron is the Bonne Family’s mood maker. When it comes to mechanical skill, even Roll has nothing on her. Though she’s not quite sure why, Tron finds herself often thinking of Rock. Unsure of her own true feelings for him, she’s still a bit childish underneath.

Even after suffering a defeat, Tron still acts super-strong!! She’s the tough kind of girl who always picks herself right back up again after a fall!!

“Everyone knows my inventions are the greatest!”

Tron is this kind of girl!!

Temperamental!!
Seeing her proud inventions destroyed makes her furious!!
When Tron sees the darling mechas she created with her own two hands get destroyed, she flies into a rage.

Self-confident
Thoughts of defeat never enter her mind!!
Tron is always brimming with self-confidence. Her belief that her mecha will come out on top never waivers.

Passionate!!
She develops a crush on Rock!?
She has some strong feelings for Rock, but being inexperienced in the ways of love, has no understanding of what it means or why.

She can build giant mecha one after another!
Tron is a mechanical girl genius. Because all of the Bonne Family’s mechas are created by Tron, she’s often hard at work remodeling them.

Tough as she is, Tron has a phobia of dogs!?
Our dear Tron is always self-confident and assertive, and even a little overbearing. However it seems she absolutely cannot stand dogs!?

The loving mother of the Kobuns!?
Even though she can be scary and sometimes punishes them for blundering things, Tron is usually tender and affectionate towards the kobuns. Because of this, they think of her as their mother.

Tron was looking good in rich-girl style fashion!
There was a concept idea that Tron would change her appearance between the time she was walking around town and when she rides up in a giant robot, but unfortunately that wound up getting cut. Too bad, Tron was looking so cute in those glasses, wasn’t she?

(start at the bordered picture, then follow the arrow)

Tron’s concept image, with a giant ribbon and folded-down socks, this battle-ready girl is accompanied by a kobun.

Done in magical girl style, this design features triple-braided hair behind the ribbon and a one-piece dress.

This image features an apron with a long skirt. She looks rather like a maid, doesn’t she!?

With kitty ears and a tail as accessories, this is the cat-girl version of Tron.

The high-legged leotard adds a touch of sexy style.

Dressed in a white lab coat. Those glasses give off an impression of quiet reverence.

The “belly-button out” look creates a bold style! The pulled-back bangs really accentuate her face.

The main focus moves to the one piece outer garment and earrings worn with all the haughty style of an aristocratic girl.

A little note, Tron’s name has had quite a few alternate translations. Sometimes called “Toron” and her last name has been written occasionally as “Born” or “Bone”. I like the English version of “Tron Bonne” best, so that’s what I go with.

It’s incredible to me how much they toyed around with Tron’s appearance before settling on her final design. She started out looking a lot like classic Roll, and eventually became something totally original. That early design had some interesting accessories, like the skull-mark bows, a skull wrist-watch communicator, and a skull mini-purse. Some of the other design elements, like the lab scientist outfit would later be used in The Misadventures of Tron Bonne. And the general idea of a glasses-wearing disguise was adapted to Tron’s reporter outfit from Legends 2.

Hope you enjoyed this look at Tron’s evolutionary process. The Bonnes are one of my favorite things about the Legends series. They make such charming and charismatic villains! I might just have to give the rest of her family the same attention in the upcoming weeks.

7 Comments to "What kind of girl is Tron Bonne?"

« Free Quint Friday
Three Things to Look for In DASH 3 »