“That’s enough, Wily!” It was Blues to the rescue!
“Uh-oh, looks like it’s time to run away!” cried Dr. Wily. “Plantman, you can handle things from here!”

Rockman and Rush combined to chase after Wily.
“Rocket Buster!”
CRASH, BOOM!
The Wily Machine was hit!
“Curses, I’ll get you for this!” yelled Dr. Wily.

Roll was found safe and sound, and even Plantman was returned to his normal cheerful self thanks to Dr. Right.
“That’s a relief!” Roll smiled. 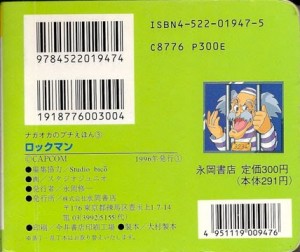