Here’s something I’d been searching for for quite a while. This page from Japanese gaming magazine Marukatsu Famicom‘s coverage of Rockman 3 sheds a little more light on something I have long been musing about regarding Rockman published art. 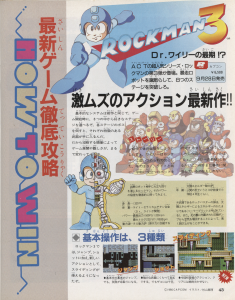 Translation and analysis beyond. NEW RELEASE GAME COMPLETE PLAYERS GUIDE
HOW TO WIN

The third title in the super-popular action game series Rockman has arrived. Reduce the rampaging robots to rubble as you bust through 8 stages!
It’s the latest in intense challenging action!!

This game’s basic system is the same as its predecessor, allowing you to choose whichever of the 8 stages you please right from the start. Clear the boss of each stage to receive that boss’ trademark weapon. Depending on what order you clear the stages, the game’s course and difficulty can change completely!

Story
In the last game, Dr. Wily’s attempt at world domination failed after Rockman backed him into a corner, making him change his evil ways. Now he’s even gone so far as to join Dr. Right in researching robots to serve world peace. But since the game’s subtitle is all about “Dr. Wily’s demise,” he might just be up to something once again.

Here to combat these enemy ruthless robots is Rockman. Here is an extensive exploration into the secrets of his power.

* The Rockbuster weapon fires a condensed wad of solar energy (termed a solar bullet). Additionally, the bottoms of his feet house an internal compression pump that uses controlled bursts of air to produce spectacular leaps.

In addition to the traditional jump and shoot, there’s now a new action to perform called sliding.

JUMP
The standard jump move is pretty basic, but mistakes can still be fatal.

SHOT
Not as powerful as some other weapons, but sufficient against small enemies.

SLIDING – NEW
Introducing a new action this time. You absolutely can’t clear the game without it.

“Marukatsu” in the magazine’s title means “all about winning” or “total rounded victory” at Famicom games. This issue’s publication date is the same as Rockman 3’s release date in Japan, and they dedicated several pages to guiding players through the game’s early levels in their own selected order.

Page 43 (above) introduces the basic gameplay concepts and the protagonist, with many (but not all) of the same Rockman data specifications. It looks like the editor accidentally missed listing his 105 kg weight and gave Rockman’s outer material composition on that line instead. The torque should also be measured in kilogram-meters rather than “rgm”, probably just a typo. Otherwise the details are pretty accurate.

There’s plenty of official art adorning the article’s margins, but one image shown smack dab in the middle of the first page of the coverage stands out from the others. 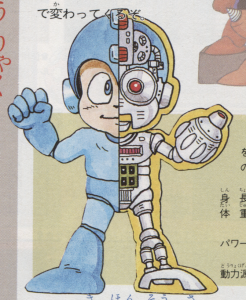 Why, it’s a colored version of the first edition Rockman schematic outline! And it’s actually in a slightly different pose, fist raised and ready for action.

However, this piece looks a bit… off. The left surface side of the image in particular. I dig the soft colored pencil look, but the inking and details especially stand out with its notably thin forearm and elbow joints, completely traced-around eye ball, and extra little dots and dashes everywhere. The line work lacks the smooth confident strokes that were the style of Keiji Inafune, leaving a few lumpy-looking edges.

That’s because Inafune had nothing to do with this piece. Though clearly based on the former’s work, this illustration is credited at the bottom of the page to Masato Sugiyama (or something like that, I’m pretty bad with name pronunciations). Presumably Sugiyama was a freelance artist brought on to the magazine to help with the workload, as I didn’t see that name listed in the regular staff artist credits. I’m guessing they had the black & white original art available to them, but chose to create their own version to match more closely with the rest of the magazine’s full-color art.

Over my years of collecting I’d found only a handful of different printings of the first official Rockman schematic, and I’d often wondered whether a full color version existed. With this additional evidence I’m going to say that it probably does not, and that even Japanese magazines had to go make their own versions or edits just like Nintendo Power’s Mega Man 3 and Mega Man: Dr. Wily’s Revenge coverage. 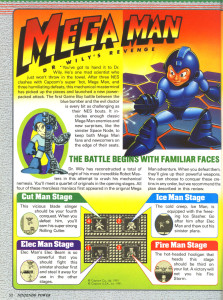 Previously that was the closest I had seen, and I don’t expect now that I will necessarily find another. Then again, who knows what treasures have yet to be unearthed?