Time now for the Irregular Hunter X edition of The Answer.

All from the X section (which happens to have the most questions by a reasonable margin, in case anyone was wondering). 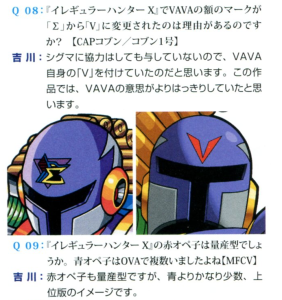 Q08: In Irregular Hunter X, what was the reason for changing the mark on VAVA’s forehead from a “Sigma” symbol to a “V”?

Yoshikawa: Because he wasn’t working directly with Sigma, we decided to give VAVA his own personal “V” mark. I think that with that game, VAVA’s motives became much more distinct.

Q09: Was the pink-haired female Operator in Irregular Hunter X a mass-produced model? I figured the blue-haired Operator girl must be because there were so many of them.

Yoshikawa: The pink-haired female Operator is also a mass-produced model, but because we imagined her as a superior version, there are fewer of her type compared to the blue-haired model. 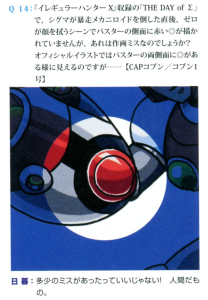 Q14: In the Irregular Hunter X video “The Day of Sigma”, there’s a scene right after Sigma defeats the berserk mechaniloid where Zero wipes his forehead with his buster, but it doesn’t have those red concentric circles on the side. Was this just a production flub? Because in the official art, we can see the buster has that concentric circle design on both sides…

Higurashi: We all make mistakes once in a while! We’re only human, after all. 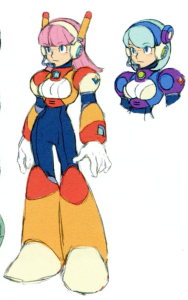 I’m a little surprised they both thought pink-hair seemed more scarce. I might need to rewatch the movie again, but I remember seeing far more of the pink girl (and multiples of her at once, no less) and the blue girl maybe only one time. It does suit Pinky to be some kind of more expensive supervisory model, since she did pretty much all of the talking, held the big meetings and communicated directly with the important characters like Sigma and X. I just didn’t get the impression that she was supposed to be rare at all. Seemed pretty obvious she wasn’t unique, although it would have been nice if they’d given one of her a name anyway.

VAVA had his own unique symbol in every other game, so I wasn’t really wondering too much why they replaced his standard insigna with a red “V”… I’d probably rather know why his appearance in X8 was “VAVA V” instead of “VAVA III”.

Actually, when it comes to Irregular Hunter X, there are a lot of other questions I probably would have asked before these. The biggest would have to be about Dr. Cain’s explosion scene. Or about what Sigma was trying to achieve by letting X live and power up before finally defeating him. Or if there was any particular reason why Zero didn’t try shooting Sigma when he was getting face-hugged. Or whether that officer repliroid had any relation to Signas as a previous model. Or Mannequin Seawater. What the heck is his deal? He strikes me as the old dog of the gang, the guy who’s seen everything more than once and done hard time in the clink back when it actually meant something. Always has a story to tell, “This reminds me of a job I did Megalopolis one time…” Throw in a couple speeches about criminals these days are just a bunch of young punks running wild, and a “Pain? Sonny Jim, you don’t know the meaning of the word!” and there you have how I picture his guy.

As much as I want there to be, there probably isn’t a really interesting story behind how he got his name. It honestly does sound as if it could have come from a “random maverick name generator” or something. Still, maybe he’s an ex-pirate who got a day job arranging department store windows during the holiday rush. Will the world ever know the truth behind this shadowy criminal? (Will anyone care if we ever do?) 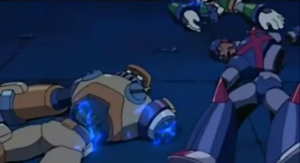 Next time on The Answer, we’ll tackle a few more X series questions. Or are you guys sick of these? I could switch it up to some Zero or something. Say when.

12 Comments to "The Lady, the Scoundrel, and the Gun"

« What-if Rockman Reboot, Plus Some Battle & Chase Love
Fate of the Four Guardians »

Monday Blues
Mega Mission 2 Translation, part 1
The Board That Rocked
Might not be able to post tomorrow…
The Familiar Familiar