To ring in the new year, here’s a little holiday manga from Koji Izuki. After what happened last Christmas, Wily plans a little thank-you of his own! 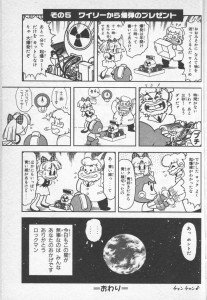 Trans after the break!

Dr. Right: What on Earth could Wily be sending to us so late on New Years’ Eve?!

Roll: It says here that it’s a bomb set to go off exactly at midnight on New Year’s day! And it’s 11:59 right now!

Dr. Right: We have less than a minute to figure out which is the detonation cord and cut it, or this year’s really going out with a bang!

Dr Right: You’ve done it, Rock my boy! Well done, figuring out which wire one was the detonator!

Rockman: Oh, I just picked the blue wire to cut because I like the color blue.

Roll: But there’s like a ton of blue wires on this thing……

Rockman: Oh, so there are!

And so once again our world is safe, and we owe it all to you.
Thank you Rockman!

2 Comments to "Have a Blast this New Years"

« Rock Manual The Third
Happy and sad, but mostly glad »