An anniversary is retrospective by nature. It’s a time of looking back, remembering how things started, and taking note of how far we’ve come. With that in mind, let’s look at what a Rockman game manual looked like 25 years ago. 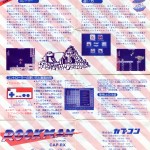 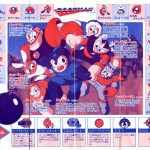 Even from the nineteen eighties, this isn’t exactly what comes to mind when one thinks of a typical video game instruction booklet. I guess it wouldn’t even be right to call it that, since it’s not a book at all. There are no pages, just one big folded up poster with a front and a back. Its uniqueness lends an unusual charm, and it does have a pretty nice overall aesthetic to it. A little heavy on the red and blue, but this thing is pretty cool. It’s like unfolding a treasure map.

Unfortunately, as you can probably tell from the scans, folding it back up correctly might take more patience than younger kids often have. My copy is used, and there are deep creases that look like it came from folding along the edges both ways. There are also a few stains and marks here and there. But that just makes it all the easier to tell this was once very loved and well-exercised. Imagining that someone used to carry this around, reading and re-reading it, pouring over the words and pictures over and over again the same way I did with my game booklets when I was a child, makes me smile.

So, what does it say?

(I’m not going to translate this. If you didn’t already know not to feed the cartridge to your dog, stick it in the toaster, or take it in the bath with you, it’s far too late now. ~#20)

In the year 200X, industrial use humanoid robots have been created thanks to the steady progress of science. Then one day, some shocking news reached the world’s foremost designer of industrial robots, Dr. Right.
“Doctor, the robots you developed have begun going out of control one after another! At this rate, mankind will be ruled by robots!!”
Humanity will be dominated by the robots!? Surely, this could only be the work of that evil genius, Wily. He must have modified the robots designed by Dr. Right to hijack their powers in a mad scheme for world domination…
“Rock” was a household robot whom Dr. Right had always regarded as his own son. Now, in order to stop the 6 robots he had built with his very own hands and to recover each of their central cores, the Doctor has transformed Rock into the fighting robot “Rockman”.
Go! Go! Rockman!! Only you can safely retrieve the 6 robots, then destroy Dr. Wily’s robot factory to restore peace!!

When starting the game, the boss character of each stage (stages 1~6) will be displayed on the screen. The player can select which of the 6 stages to begin, in any order. To select a stage, move the cursor over the character and press the Start Button to begin that boss’ stage. Once stages 1~6 have been cleared, a new character (the enemy scientist, Dr. Wily) should appear at the center of the stage select screen to access stage 7. (Also, each stage can be challenged again and again even after it is cleared.)

At the start of the game, the player has only 1 weapon. As the boss of each stage (stage 1~6) is defeated, the player will gain the use of the weapon employed by that boss.

*This game is for 1 Player. Please use Controller I.

Rockman (No.001)
“Rock”, the first humanoid robot developed by Dr. Right. Built as a prototype robot, Rock was reborn into the battle robot “Rockman” in order to stop the evil ambitions of Dr. Wily.

Cutman (No.003)
A tireless industrial logging and wilderness reclamation robot. This powerful robot possesses great agility and is highly resistant to wind and rain. His weapon is a boomerang.

Gutsman (No.004)
Designed to be a land development robot. He was built with a special alloy which causes him to be impervious to many weapons.

Iceman (No.005)
A robot working as a cargo operator in a cold storage warehouse, but this robot was originally crafted for Antarctic exploration. Though he may not look like it, he’s actually quite a formidable foe.

Bombman (No.006)
Like Gutsman, this robot was created for land development work. The way he tosses those giant bombs of his around, he can be difficult to approach.

Fireman (No.007)
A robot developed for work in a waste disposal plant. He can melt nearly anything with his flames that reach 7000~8000 degrees.

Elecman (No.008)
A robot capable of managing the output of atomic energy plants. His razor-sharp judgement and lightning-fast mobility allow him to carry out tremendous attacks! Of all of the robots developed by Dr. Right, he is hailed as the highest technical achievement.

And now, for some regional comparison: The US Mega Man instruction manual. This one is in the more traditional booklet form, 20 pages long from cover to cover and held together with a single staple. (You’ll find my copy of this also has quite a bit of wear and tear on it, so again, my apologies.) 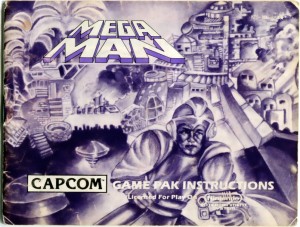 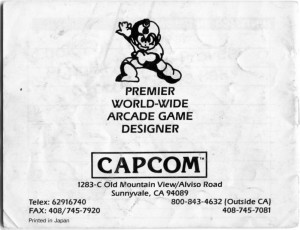 Now I am not going to say that one is better than the other. Rather, I think both have clear strengths in certain areas. I’m just going to point out some of the differences.

Both manual versions serve as testaments to the gaming atmosphere of the times, and help to elucidate the differing marketing approaches taken by the Eastern and Western branches, even when working from what is nearly the exact same game.

6 Comments to "The Rock Manual"

The Familiar Familiar
Trekkies have one… shouldn’t Mega Man?
Q-bans³
What month is it again?
How to blog