The Capricious Rock & Rush is the comic series drawn by Capcom’s accidental manga artist, Sakura. These and his other works have appeared in various Capcom books, fan club magazines and promotional materials, and were even included as unlockable art in the gallery of the PS1 Rockman ports (soon to be available on the PSN!)

His unique rendition of Rockman and his friends portrayed them as troublesome kids who get into some strange (or sometimes ordinary) adventures. Rock in particular is rude, rash, reckless, rebellious, and completely without remorse, which only helped the shorts in attaining their notoriety in Japan. Set completely apart from the expected norms of what Rockman was all about, Rock and Rush and its unconventional author were satisfied just to be making a few laughs doing their own thing.

What kind of thing, you ask? Let’s find out!

Sakura cooked up an autobiographical look at the R&R series and his own history in manga drawing for the Rockman 2 The Power Fighters Capcom Secret File: 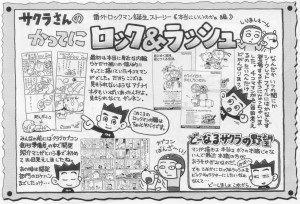 The Special Rockman Creation Story — “Is this for real?” Version

Somehow, I always manage to slip these into the Secret Files without anybody noticing. It’s hard to come up with all these cartoons sometimes, but I always persevere!

You know, the truth is that I first started making these as inside jokes just for myself and some close buds. That’s why there’s actually a lot strips with questionable material that I can’t show you! Yeah, too bad I can’t show ’em.

“Check out Rockman’s face in this panel, it’s pretty rad.”

My first real debut as a published cartoonist appeared in Club Capcom’s zeroth issue. It was a manga about introducing the basics of game development. I guess we were trying to recruit more developers at the time or something…

What’s Next for Sakura

Drawing manga isn’t actually my true profession, though lately I’ve been blowing off my real job to do it. (Rad.) Secretly, I want Rock and Rush to take off and become extremely popular… How about it guys.

And become popular it did. Not extremely… but just enough.

The strips featured on the left side of the comic were some of the first. Here are their original forms as shown in Capcom Illustrations:

Here’s a few more strips that appeared in the same Rockman Secret File:

You can find some more of Sakura’s Rock & Rush at the bottom of pages 144 and 202 in the Mega Man Official Complete Works book. They’ll probably pop up again on the Lav, too. It’s just too strange not to!