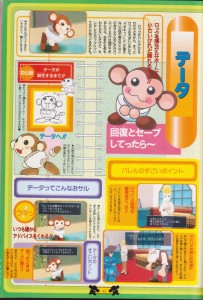 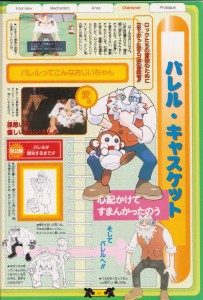 Rock and his pals’ exploits are supported by the original go-getter adventurer!!

Roll’s grandfather. Now aged 65 years old, but in his youth he was a special top-notch Digouter. Called “the Immortal” for his unrivaled exploits, Barrell now uses all his knowledge and experience to support Rock and Roll in various ways and provide them with useful advice. He seems particularly strong at archaeology.

Barrell’s this kind of Grandpa

Warm-hearted
He’s a grandpa who always thinks fondly of his grandchild!
A gallant adventurer in his glory days, grandpa Barrell is a dependable asset to the team.

Wearing that white lab coat, he certainly looks the part of a professor. Looks like he’s had some kind of surgical operation on his head, from some old injury perhaps?

His back is really curved! And with those big gloves, he looks a bit scary!

Here he’s still leaning on a cane here. And who’s that young lady next to him, an assistant perhaps?

And to Barrell at last!!

Dropping the cane made him appear younger and more able-bodied.

He’s a super-famous celebrity adventurer!!
Barrell was such a renown Digouter, even the mayor Amelia was once his assistant!

He’s old friends with Mayor Amelia!?
So he was late returning because he was talking to the Mayor Amelia for so long? It seems the Mayor was an old acquaintance of his in the past.

Rock’s supporter who sticks to him like a shadow. He may be small, but he’s thoroughly reliable!!

Ever since the time they were found by Barrell, Data has always been by Rock’s side. This mysterious little male (we think?) monkey’s real identity is unknown. He speaks only in monkey sounds like “Ukiki!” but somehow Rock alone is able to understand him. His creation and age are completely unknown, yet could it be that he knows something about Rock’s past he’s not telling?

He seems like a carefree little fellow, but he does more than just dance. He’s actually quite useful!

“Come see me if you want to recharge or save~”

Even with a shocked face he’s totally cute! In the Caskett household, he’s well-recognized and adored. <3 On to Data!

A monkey whose true nature is unknown. His adorable appearance doesn’t seem to have changed much from the start.

Data is this kind of monkey

Ukii!
He’s always ready with some good advice!!
Whenever you see Data, he’s usually got something interesting to tell! He can teach Rock all sorts of things.

When in doubt, listen to Data!!
What’s that? You’re not sure where to go? At times like these, it’s best to ask Data what to do!

With everything we’ve seen of Data (or not seen), there’s been some speculation over the years that he was originally just going to be a cute support character to serve as an adorable icon, but with adding little weight to the actual plot. His growing role could well be the reason why Miss Nurse was dropped from the cast. Funny that given how well thought-out his role appears now, as plot exposition, Rock’s link to the past, and his use in life recovery and game saving and everything, he may have once been nothing more than a cutesy character to accompany the elderly professor.

Speaking of whom, Barrell’s earliest sketch with the pipe and doctor coat and early Data prototype next to him… Is it just me, or dos he look a bit like Teisel? I think Barrel’s final design is easily the most suitable. More jolly old man, less creepy geezer vibe.

Where they mention Barrell’s relationship to the Kattelox mayor, there’s one instance where they call her “Mayor America.” Probably a typo, but I found it a bit amusing.

We may be done with the main character bios, but there’s still a lot more to explore with this guide. We’ll probably pick it up again later on! 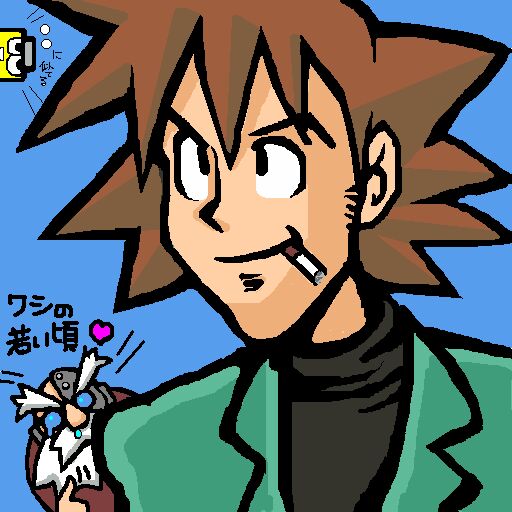 The Kobun in the corner says “He… he looks familiar…” and Barrel is saying “My younger days <3″ Is this Barrell recalling his youth?

5 Comments to "More Fun Than A Monkey of Barrell’s"

Friday Filler
For Chrono Trigger Fans
The Fine Art of DASH2, Starring #20!
Carddas Countdown Celebration: 10, 9…
If there is no problem…