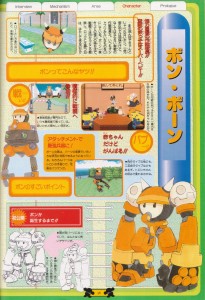 The proud inhumanly strong operations officer!!
The youngest of the air pirates is a super baby!!

Bon is still a baby and can’t really talk yet. Even though he’s the simplest among the three Bonne siblings, his combat and field leadership has proven absolutely indispensable to the group. He always has what looks like a pacifier in his mouth. He is without a doubt the strongest member of the Bonne family, and without rival in battle prowess. Will the day when he defeats Rock finally come!?

Even though “babuu” is all he can say, his facial expressions are richly articulate.

Bon is this kind of boy!!

Babuu!!
Though just a baby, he always hangs tough!
He may be the youngest child among the three Bonnes, but he’s also got the largest body! Even so, he’s still just an infant.

Fight!!
He actively participates in battle!!
Bon excels in his combat unit, and can often be found leading the attack from the front lines. Even though he’s so young, it seems he’s extremely dependable.

His greatest weapon lies in his attachments!

Bon Bonne’s body consists of parts which can be swapped out to adapt to any number of circumstances. Naturally, these parts are hand crafted by Tron, so their abilities are top notch!

In addition to the flight type, there’s also a bipedal type for walking and various other attachments. Its versatility may only be limited by Tron’s own imagination and taste.

We were trying out different head parts with this design, which somehow turned out pretty scary-looking!

Once we settled on the head and torso being joined as Bon’s main characteristic, the rest just fell into place.

He looks a bit at intimidating at first, but Bon with his adorable voice and his giant baby bottle becomes fast endearing. They really do make you feel bad for blowing up a toddler. Why are you picking on the poor kid? He just wanted some treasure. Meanie.

Questions on what exactly he is have as yet been deferred, but in the meantime it’s always fun to speculate.