Somehow I totally overlooked this before. I’d be remiss not to mention it, so let us now correct this injustice! 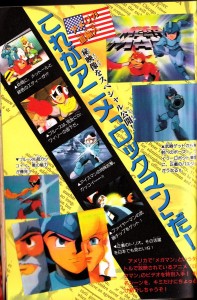 Imported Directly from America
This is the “Rockman” Anime!

We’ve obtained a special video copy of the “Rockman” anime airing in America under the title “Mega Man”! And as an introduction we’ve put together some of the most interesting scenes just for you!

Top-right: Here’s the get weapon, ready to fire pose! When Wily’s robot army causes trouble, this buster of justice roars to attention!

Bottom-left: The righteous trio. It’d be great to see this come to Japan!

First in strip: As for other allies, there’s a mettool, and a green Eddie!?

Fourth in strip: Getting equipped with Fireman’s weapon chip!

This book came out in December of 1994, so a few months earlier than this one, meaning that this was probably one of the very first looks at the animated series Japanese fans received. It also gives a few different screens and details than the later articles, though not many. I’m ashamed to have missed it earlier!

A look back in time with Chrono Trigger
Retro Six
Sigh.
Mega Man?
Mecha On Parade