This is one of my favorite 25th anniversary tribute images published in R20+5. 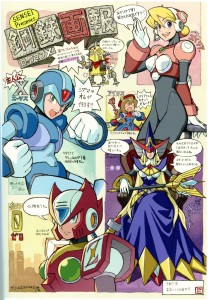 The art stands pretty well on its own, but to catch all the jokes and innuendo some translation may be required.

“Hello everybody!! Thanks so much for all your love and support of the Rockman series!!”

“This time they gave me one whole page to fill up with whatever I wanted! (As if I wasn’t busy enough already…)”

It’s always best said with dramatic emphasis like that.1

Bento? What’s that supposed to mean…2

Zero’s so cool he gets his own dramatic backlighting.

Hey, why shouldn’t I get to draw a gag face once in a while?

“I’m so delighted to see you boys again!”
Seems like something she’d say.

“It’s simply a crime that I only had one official art image!”3

“Yes of course I have legs underneath my skirt!”4

That’s all for now. See you again someday!!

2. If you haven’t run across this Japanese Rockman meme, now is the time!

3. Yes it is, which is why I’m really happy to see you also, Berkana!

4. Don’t tell me you never wondered about this.

5. Poor Iris. The imaginary rivalry for the title of “X Series Heroine” rages on…

Sensei definitely has a place in my heart for his work on the X series. His flavor of art just really takes me back. Coincidentally, it feels like his art style became prominent around the time I started enjoying the X series more for the characters than for the amount of fun I actually had playing the games. Very nice to see more art of Berkana, especially since the game she starred in had an important (though ultimately trivial) influence on this very blog. If this is the Rockman X Edition, I wonder if there aren’t more Steel Illustrated cartoons out there…