Your free pic this Friday comes from the Rockman Battle & Chase soundtrack booklet, featuring art of Iceman in his racing machine, the Cool Mobile. Note the differences in angle and pose from the “tugging on the glove” Iceman racer image used just about everywhere. This variation didn’t make it into the Mega Man Official Complete Works book, and for all I know, it could be an early unapproved draft that may have only been included in the soundtrack booklet on accident. Too bad, I’d love to see it in color! 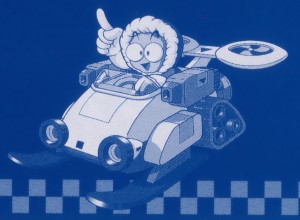 6 Comments to "Iceman vies for the number one slot!"

« Come on guys, no cheating!
The Sigma Factor »

The Rock Manual part 2
Dr. Right Explains It All
What month is it again?
Have a Blast this New Years
Retro Designs