We’ve covered how Hideki Ishikawa’s original character W. Waltz has left her mark in various works, but what about some of the other characters?

The politician/police chief character also made his own comic cameo in Hitoshi Ariga’s Rockman Megamix. Those of you who picked up Udon’s Mega Man Megamix 1 release might have noticed these panels from the first story, “The Birth of Mega Man.” 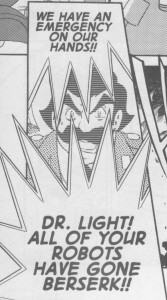 This important man personally contacts Dr. Light via videophone to inform him of the robot situation and to appeal for help. In the panel below, you can see his female aide also makes an appearance in the background behind him. 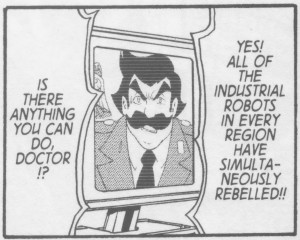 I have a feeling this may not be the last we see of them, either.