I hereby declare this week Rockman Manga Week at the Lav! I’ll post up a new scan and translation (but not scanlation) every day until Friday.

We’ll start off with the one-page comics that appeared in the book Rockman Perfect Memories. They are the work of female yonkoma manga artist Yuutarou Kawamoto, who is perhaps more famous for her work with other franchises like Dragon Quest and Ragnarok Online. This first manga appeared on page 40 and is about the original Rockman series. Take a look! 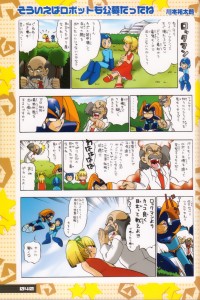 Roll: Hey Rock, why do you suppose the Wily Machines always seem to have a stronger mode that only appears after they get damaged?

Rock: Hmm, maybe he designs the armor to break on purpose so that his face will show?

Roll: I bet he does, that big show-off!

Wily: Hmph… Listen to them just chattering away…

Wily: Forte!! Go and show them our power is nothing to snicker about!!

Forte: Well, why DO you always hold back with some ridiculous final form?

Wily: FOOL!! The best robots always have a transformation sequence!! Once they change form, all the kids go “WOW!!! Wily robots are the coolest!” Don’t you know, that’s how you win over their hearts! It’s a shortcut to world domination!!!
WHA HA HA HA HA!

Roll: Yeah, cos you were screaming super loud…..

Wily: It’s our only chance!! You must strike now, Forte!!

Wily: Make sure that your fighting moves look way cooler than Rockman’s!!
Oh, and try to win too, if you can.

Rock: Is Dr. Wily really trying to take over the world….. like that?

Coming up next: Rockman X!

5 Comments to "The Manga of Rockman Perfect Memories, part 1"