So, any of you guys excited about Marvel vs Capcom 3? I’ve never been huge into fighting games, but I really got into Tatsunoko vs Capcom last year, and now I’m totally looking forward to kicking some butt with Zero and Tron. Apparently their character endings have already hit the net, so those looking for spoilers can already find ’em. But not from me, I’m still shopping for a bargain/waiting for the price to go down.

Nevertheless! To mark the occasion of the release, here’s a quick look back at Zero’s first appearance in a fighting game with the rough sketches and designs for SNK vs Capcom: SVC Chaos from the Extreme Encounter guidebook. Of course, that was Zero series Zero, with moves and specials aligned with that style. Besides the iconic triple slash and a buster projectile, don’t expect to be seeing too many of these attacks in MvC3. After all, he’s “Zero, not Mega Man Zero.” But check ’em out anyway! 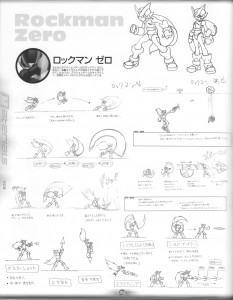 Rockman Zero
Hails from the action game “Rockman Zero”. That’s why his techniques stand out a bit from the other hand-to-hand fighting characters’. We wanted him to retain that vigorous, energetic image of an action game character.

4 Comments to "Zero: Drawn to Battle"