Japan is a little over half a day ahead of us in the states, so Rockman’s birthday really begins this afternoon. With that in mind to those of you in Japan, Happy 23rd Birthday, Rockman! And for the rest of us, one more day! 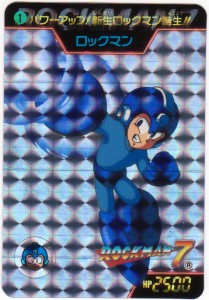 To celebrate, here’s Rockman Carddas #211 which sought to revitalize the card series with a theme of Rockman’s rebirth!

But, not everyone is quite so enthusiastic that Rockman has seen another year or continued existence. For the past 23 years, Rockman’s arch-villain and nemesis Dr. Albert Wily has tried and failed time and again to best our hero.

But despite all these defeats, Wily never gives up! And in that regard, he is as much to thank for the series’ longevity as any character, if not more! In true Mojo Jojo fashion, the super fighting robot Rockman wouldn’t even exist if not for him! So in addition to Rockman, this celebration is also for Dr. Wily, without whom this series would not have occurred at all! 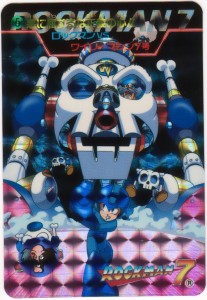 In this scene from Rockman 7, Wily pulls out one of his toughest combat vehicles yet to battle Rockman.

Rockman vs Wily Machine 7
5. His righteous heart will never yield to evil!!

May their eternal struggle continue for years to come!

Punk’d
When it rains, it pours
Happy Halloween
The Manga of Rockman Perfect Memories, part 3
So February rolls around…