We were recently introduced to Klickelan Island, the latest addition to our growing Mega Man Legends atlas. What we’ve seen so far about Teomo City and its people had me very excited. It may be a new backdrop, but as far as Legends-style settings and adventures are concerned, for me this place feels more like coming home.

But this post isn’t about Klickelan Isle, but rather the entire setting concept of Legends itself. Before we had such a well-developed sense of their world, what kind of possibilities were the developers exploring? What kind of strange new places might we have experienced? Once again, Professor Data explains.

From the Rockman DASH Great Adventure Guide on page 34: 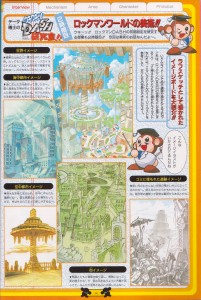 “Uki~! It’s our second session, and in this lesson we’ll be investigating the early setting for Rockman DASH!! This time the art will be telling the story!”

Your grand introduction to the rough sketches drawn for the image board!
Many assorted images of cities and ruins were drawn up, weren’t they? These are all illustrations that were done brainstorming the answer to ‘What kind of style is befitting for the world of Rockman DASH?’ Using all these various images and illustrations as a reference, we can develop a picture of the formation of our world!”

“These concept illustrations are incredible, wouldn’t you say!”

World Image
“Set atop a foundation of giant cogs and gears sit sprawling cities! What a surreal and fantastic concept! The inhabitants would probably have to use flying ships just to get around. That’s a bit like how we live, as well!”

Submerged City Image
“This one really gives off the impression of an ancient city, sunken below the sea! This idea of a long-lost advanced civilization with all its forgotten glory was adapted into the game! I wonder if the world we live in also has cities lying beneath the sea?”

Sky City Image
“Propped up by an enormous pivot, these ruins were constructed high in the sky. This place resembles some kind of ancient pleasure garden, now fallen into deep decline.”

Streets Image
“Through repeated cycles of urban development, this town appears to have gotten quite complex! I’d bet that to navigate this bustling town you’d probably rely on some kind of steam engine.”

Garbage-covered Ruins Image
“Probably left behind by some environmentally careless culture sits mountains of strewn refuse. I wonder if we couldn’t find a use for some of this stuff? The idea of exploring ruins of a higher civilization was a part of the setting concept from the very beginning.”

Very interesting how all these different ideas came together to shape their world and become the stage of Legends as we know it.

You can really feel the contrast between the vibrant energy of the emerging Digger civilizations and the forgotten entropy of the ancient culture. I love the way the artists used color and shadow to express some of these desolate places, but my favorite would have to be the giant gears hands down. Just imagining a place like that is absolutely breathtaking. I couldn’t live there though, the height would get the better of me for sure!

7 Comments to "Worlds of Possibility"