A prerequisite to digging, and a crash course on the world of DASH.

With the full multi-region and international Mega Man Legends 3 Project soon to be underway, I think it’s a good idea to come to some common understandings on the gap between East and West. For some fans this is merely a review, for others, it may be an introduction. First, some basic terminology. I’ll start off using the English, with the Japanese counterparts for each name or term in (parenthesis). There are a few spoilers towards the end, but they might be considered pre-knowledge at this point. Proceed at your own risk after the black-out. Ready?

Our protagonist is MegaMan Volnutt (Rock Volnutt). He lives on the planet Terra (simply “Earth”) where he lives as a Digger (Digouter) that flies across the world in a flying ship (hikousen) seeking out spinning energy crystals called Refractors (Deflectors) from ancient underground ruins to use, sell, or trade. He wears blue armor and has a customizable primary weapon oh his left arm that is called the MegaMan Buster (Rockbuster), that he uses in addition to equipping various other special weapons on his right arm. His partner is Roll Caskett, his Spotter (Operator) who stays above ground and uses equipment to monitor him and help him navigate the ruins. Ruins often have ancient mechanical guardians called Reaverbots (Leebirds) who protect areas from invasion. Rock combats these, as well as sky pirates (kuuzoku) like the Bonnes (Bones) and their Servbots (Kobuns). Diggers and explorers tell tales of the Mother Lode (Great Legacy or ooinaru isan), an ultimate treasure that would solve all the world’s energy problems, and make them rich beyond their wildest dreams.

MegaMan’s true identity is MegaMan Trigger (Rockman Trigger), a 1st Class Purifier Unit (ittou shukuseikan) of the Master System who was once the close friend of the Master, the last original human being. All people alive on the planet today are actually artificially created beings called Carbons (Decoys). The Master’s dying wish was for MegaMan to protect the carbons and their way of life. The System which was designed to protect and serve the Master thought MegaMan Trigger to have gone Aberrant (Irregular), and so pursued him. After his final battle, MegaMan succeeded in putting the system on hold, but was forced to Reset his body to keep from dying. All his memories which would be wiped during the reset were stored in his robot monkey companion Data, and the two rested for many many years while sealed in a kind of stasis, to eventually be found by Roll’s grandfather, Barrel some 14 years before the first game begins.

At the end of the second game, we last left our hero stranded on the world of Elysium (Heaven) with the two Mother Units: Yuna who was inside of Roll’s mother Matilda’s body, and Sera who was using Yuna’s old body.

Now that we have that out of the way, let’s explore some more of their world. We’ll be using the Japanese terms covered above. Let’s go! 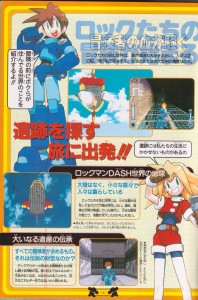 The Adventure of Rock and his Friends Begins!
The Blood of the Adventurer Stirs!

The world Rock and his pals inhabit is mostly covered by oceans and seas, and people travel place to place soaring through the skies in vessels called flying ships. Their way of life is supported by the legacies left behind by an ancient civilization.

Rock: Before the adventure, we’ll introduce you to our world!!

Set out on a journey to explore the ruins!

Roll: We depend on the ruins for our livelihood.

The Earth of the Rockman DASH World

Continents are all but nonexistent, and people live on small islands.

The world Rock and the others live on is dotted only with small islands, and continents as we know them don’t exist. In times long past, there was an era of highly advanced civilization, where it’s said a Great War occurred. Perhaps this is how the ground sank under the sea level.

It isn’t just Rock and his group that journey across the seas. In their world, everyone travels by flying ship!

The Tale of the Great Legacy

What every adventurer seeks. What is this legendary treasure?

The adventurers called Digouters all hunt for this mysterious prize. Tradition tells that it is something that will make energy shortages a thing of the past, and so many believe that the treasure itself must be some sort of giant energy source.

Adventurers seek out treasure, and that’s how they make their money. The ruins are indispensable to their lives!

In response to the above, some large continents do exist, as shown in DASH 2, though granted they are not like our modern continents of today. Not everyone uses flying ships either, plenty of townspeople live out their entire lives on one island. But if you’re an adventurer going from one island to the next, the flying ship is the only way to go! (Unless you’re the Bonnes at the end of DASH 1.)

The legendary Great War of the past that sunk the continents is still unexplained. At times it’s been speculated to be the Eurasia Colony Incident of Rockman X5, the war between Trigger and the Master System, or something else that occurred in-between, perhaps with the mysterious Elders (furuki kamigami) that were introduced towards the end of the last game. With DASH 3, we may finally learn the full story.

4 Comments to "Prelude to Adventure"