Hey guys. I know it’s Monday, but I don’t really have anything for you. Sorry, I’ve been kinda busy with other things. So instead, I think I’ll answer a few of the questions I’ve been getting lately.

First one that I’ve been asked by several people, “What are all the Capcom magazines and newsletters, and where can I get them?”

How many there are, I have no idea. There have been quite a few different publications over the years, among the oldest being Capcom World News, Capcom News Wave, then you have Capcom Magazine, Club Capcom, Capcom Secret Files, Capcom FAX, CFC-CAP!, the game specific mini-mags like Rock Maga, and then there’s the Gamest Mooks, the Comic Bon Bon Specials, the Capcom Official books series, the promotional art pamphlets, and some I’m sure I’ve probably never heard of.

I got most of my books via import stores or auction sites like Ebay and Yahoo! Japan. A few I got from some friends in Japan. I don’t have any secret method or special connections, I’m afraid. I’ve been pretty lucky for the most part, in seeing them and snatching them up. My advice to you is to just keep a good lookout.

Next question! RADIX asked, “I’ve already looked, and could find nothing on Super Adventure Rockman that we haven’t seen before. I’m thinking that it may have been covered in Japanese magazines/guides, but I don’t have access to those. Can you dig anything up?”

Oh man, I wish! I have a few Japanese books like the Rockman 10 years History Book and Rockman Perfect Memories that talk about the game, but you’d learn more about the game from a basic internet search than you would from those little pages. The CFC-CAP! books didn’t cover it other than release date information. I haven’t even seen any art made for the game that wasn’t the cover itself. I’m sure there would be information somewhere in gaming magazines of the time. Whether or not it had anything rare about the game, who knows. I wonder if Capcom didn’t support the title very well because of Inafune’s spoken feelings about it in the Mega Man Official Complete Works books? It’s hard to say without the magazines to show for it. Don’t give up hope of something like this being found though, old things have a way of resurfacing on the internet.

Anonymous asked yesterday, “does this guy have an official name?” 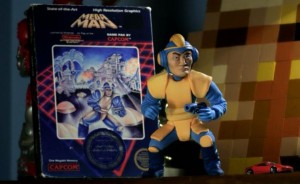 I don’t know about an official name, but he does have a Japanese pet nickname thanks to U-Capcom. It’s “Megaman no Ossan” 「メガマンのおっさん」. Capcom’s Yuji Hayakawa used it for explaining the legendary hero character from a secret disk in Rockman ZX Advent, and it’s been used popularly in Japan ever since. Ossan is (somewhat derogatory) slang for a middle aged man, so it would have connotations along the lines of “old dude”, “old guy,” “old boy”, “man boy”, “over the hill”, “mid-life Mega Man”, “40 year old virgin Mega Man” or even “creepy uncle Mega Man”. It’s a term of endearment, really.

ZeroXSaber asked if I thought that Mega Man Rush Marine is worth buying.

Of course, MM:RM is not your typical Mega Man game. It’s basically a auto-scrolling shooter with Mega Man characters. Whether you’d be interested in something like that is up to you. The game’s resolution and play control might vary depending on what kind of phone you have. The Blackberry version had pretty high resolution, but I hear that some of the other versions did not, and so had a smaller play screen. I didn’t care much for controls myself, but I’m new to playing cell phone games in general, so I don’t know if that’s the standard. I guess the bottom line is that you’d have to decide it for yourself. The cheapest I saw the game was at Blackberry App World, one thing that I would definitely recommend if you decide to buy it is that you find yourself a deal. I do think more than $6 is honestly too much for this game.

That’s it for the Q&A today. Sorry again about not having any translation goodies up, I’ll try to get something together before the week is out.

2 Comments to "I answer some questions"