Nintendo Power #20 with Mega Man and Rush on the cover came out in January of 1991, featuring a full 20 page spread about Mega Man 3 that included maps, tips, and some amazing artwork. They also had a pull-out poster for Mega Man 3 in issue #18, featuring beautiful art of the bosses and Gamma, in the same style. Some of the art also appeared in the Nintendo Players Guide NES Game Atlas.

Somehow (I’m betting on some kind of Google search myself) the poster and a handful of character art became featured in the Mega Man Official Complete Works book on page 149, and some clips from the poster were even featured on the cover itself.

Did Capcom have to ask for any specific permissions to use this art? Who was the artist?

Much as I’d like to answer, I don’t know. There’s a list of illustrators in the front of every magazine, but not who did what. Also, there are both American staff and Japanese staff, because Nintendo Power had a sister magazine in Japan called Family Computer Magazine (FamiMaga) that used much of the same coverage and art. Was the artist American or Japanese? I might not know the answer, but there is something I can tell you. The artist, whoever it was, had official Capcom materials to base their work on. 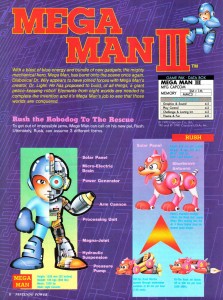 Page 8 kicked off their coverage with a story synopsis and a schematic rundown of our two heroes, Mega Man and Rush. Though the art is original and not Capcom’s own, the labeling over Mega Man and Rush’s various parts and function is way too accurate not to have been taken from Capcom’s own materials. 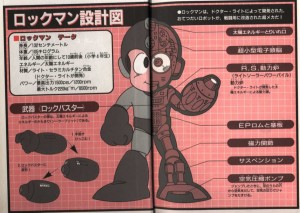 Comparing this Japanese Rockman schematic from the Rockman X Daizukan book (an image that was also used in Rockman World/Mega Man Dr. Wily’s Revenge in the get weapon screen) with Nintendo Power’s above, the height, weight, shell, motor, and the parts descriptions are nearly identical (with a few minor changes, like “Rockbuster” to “Arm Cannon”).

And Rush? Try comparing the information there to page 120 of Mega Man Official Complete Works below. 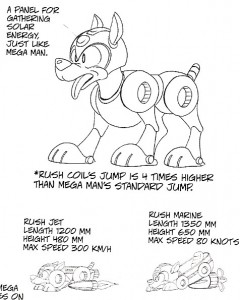 The location of the solar panel, the height the coil can extend the jump, the top speeds of the vehicles and rough dimensions of them all match pretty well with what NP had. The only really obvious errors are with the metric conversions. 300kph is only 186 miles per hour, not 556. And the 80kph top speed of the Rush Marine should actually be 80 knots, making it 92 miles per hour (but still pretty fast for a submarine). Otherwise, I’d wager that the height and weight for standard Rush, as well as his motor power and the shortwave antenna are also accurate, but are based on some source that I’ve yet to come across.

In addition, many of the poses used by Mega Man using special weapons, the bosses, and minor enemies are the same as you’ll find in the official artwork in the Mega Man Official Complete Works book. Those of you with the book, try comparing the below page from Nintendo Power with pages 17 and 18 of MMOCW for yourself! What do you think? Pretty spot on, wouldn’t you say? 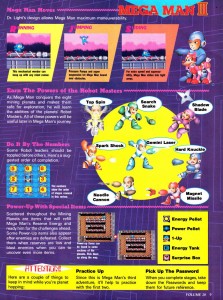 Many of the pictures NP’s art was based on were not widely published in the US in 1991 (if at all) so the only conclusion left is that the artist was working directly from Capcom’s own materials, I presume to make them into something the artist deemed more appealing for the American market. And I must admit, I found the art extremely appealing when I first saw it nearly 10 years ago! I guess it worked.

Tomorrow is the final day of retromags week. Have I saved the best for last? Probably not, but meet me here tomorrow anyway! Home stretch, guys! Let’s go!