Pretty soon Capcom is going to be selling cutesy Rockman stickers. Would you believe there was slightly similar merchandise for sale 20 years ago? Wow, what a segue.

Q-ban, the chinese version of chibi and what some old-schoolers out there might still call “SD” (meaning super-deformed, not standard definition) was blowing up in the nineties, and so you might not be too surprised to learn that Rockman X was among the popular franchises to get cute-ified and slapped on to all sorts of cheap items from stickers to decals to cards and posters. I’ve managed to track down and scan a bunch of these, and since it’s an easy way to artificially inflate this blog’s content, I’m only going to be posting a few at a time. 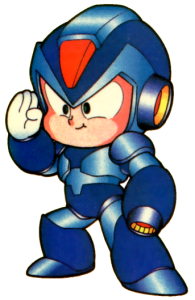 There he is, our titular star. The style is something like Inafune meets Toriyama, but that might be giving it a little too much credit. Sometimes like in this piece he has three fingers, other times he will have four. Body colors, pupil size and armor details also vary wildly. They’re cute, but I don’t expect there was too much concern over quality control out of this bunch. 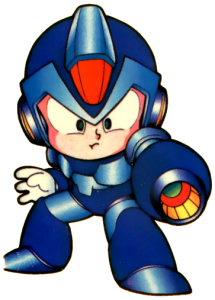 Ready to go toe-to-toe with the mavericks
…well, if I could find my toe I would be.

I can only assume that in whatever original format this image was made for, the end of X’s foot got cropped off. Unfortunately it remained that way every time I saw this image reprinted on anything, regardless of where the edges were. To this day I’ve never seen the end of X’s boot for this piece, but it probably wasn’t anything too spectacular. Sorry X, hopefully your boot power-ups will come with a new one. Speaking of which… 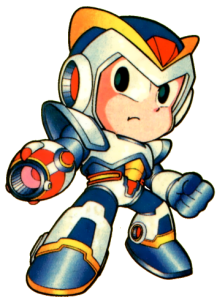 Out of all the Q-bans of X in his X1 max armor, this one is probably the closest to being accurate. Close, anyway. There are plenty of stylized details that are unique among these variants. I find the variations on the chest and belt to be the most interesting. You can expect a lot of “whoops” on the coloring, the bottoms of the feet on this piece for example. One gold, one blue? Why not. 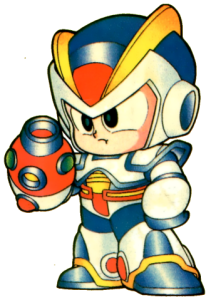 “How do you draw this guy’s gun arm again?”
“Eh, I can’t remember. It has… circles on it? Yeah, just draw a bunch of circles.” 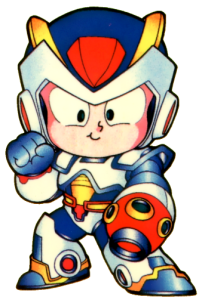 More circles. It’s kind of interesting to me how the artists interpret the white part of the helmet to jut out in front of the other parts. 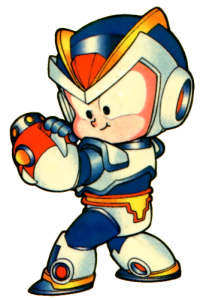 Now they remembered there are also long parts on the buster, so they put the circles on the outside of the gun barrel instead. Brilliant! 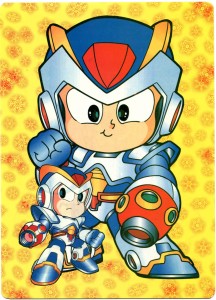 Here’s one of the larger special images. If they look a little different than the ones above (Oh, what big eyes you have!) it’s because there are little variants all over the place with these. Very little consistency at all, outside of chopping toes. Nothing says action-packed adventure like a background of yellow snowflakes.

I tease, but I actually do enjoy these for what they are. Expect more Q-ban bombardment next week.

« Infinite Remix
A Most Irregular Manga »