You might say Hitoshi Ariga is a man who appreciates little cameos. His mangas tend to be full of them, the Rockman ones especially. It helps to keep an eye out, because you never know who might pop up in his works. Even Rock’s less famous older brother.

Sakura’s original character got a small cameo in Ariga’s manga story “Metal Heart”. When the Yellow Devil mk-2 runs amok through the city, among his collateral damage lies a sign for a downtown coffee shop. Check out who’s on the logo! 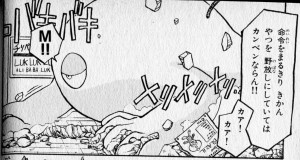 Now, Ariga is also known for updating his artwork with every republication of his work. The above was from the original 1996 version of “Metal Heart” published in Rockman Remix. The panel was retouched for the 2002 Enterbrain Rockman Megamix 1: R Hakai Shirei. When it appeared again in 2009’s Wedge Holdings Rockman MegaMix Vol. 1 it looked largely the same, as does in our English counterpart Mega Man Megamix 1 from Udon in 2010. Here’s the revised version from the 2009 compilation below: 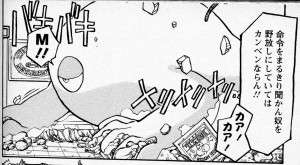 Though the question remains… Can you really trust a Sakura character with your food?

Retro Six
What-if Rockman Reboot, Plus Some Battle & Chase Love
The Next Mega Man Idol
More Q-bans!
You Asked For It