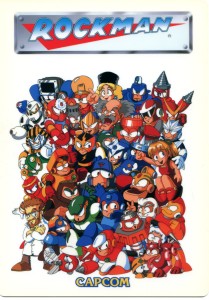 This special free promotional jumbo card advertised 3 new Rockman titles headed for release in December of 1992: Rockboard, Rockman 5, and Rockman World 3. The front uses the same art as the Rockman 1-3 and World group picture, extended with art from the characters of Rockman 4 thrown in on the top and left. Would be interesting to try and visualize how this would look if they’d kept going adding characters all the way until R10. Art project, anyone?

Here’s the reverse with the ad stuff. 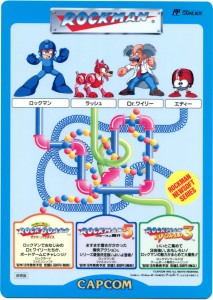 I wonder why suggested prices on GameBoy titles include tax and Famicom ones don’t? It’s wild that they wanted to release that many Rockman titles in the same month, however Rockboard would end up being delayed until January of ’93 in Japan (and released nowhere else). Mega May on Virtual Console puts that number of releases to shame, though.

I answer some questions
AAARRF!
It was Tuesday
Inafune Remembers Rockman
Q-ZERO