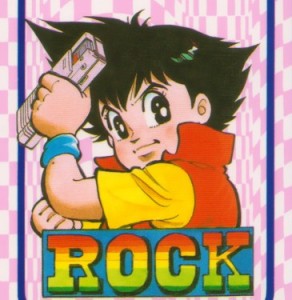 Last time, Hajime and the Rock’n Gamers (but mostly Hajime) had reached Wily’s skull fortress, much to the dismay of their opponents, the Bit Benders. Meanwhile, these events had not gone unnoticed by BUG HQ, who had been monitoring the battle. 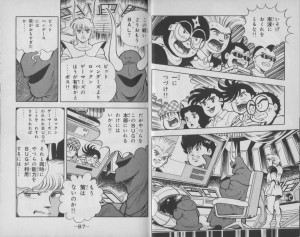 Having determined that the Bit Benders will surely lose without their intervention, BUG wastes no time in hatching yet another evil scheme. The Boss confers with his minions and BAL, a self-aware supercomputer developed by BUG scientists to help them take over the world and interacts with the physical realm in the form of an androgynous hologram, to analyze the situation and decide how best to stop our heroes from getting any further. They plot to awaken a traitor from within the Gamers’ own ranks! 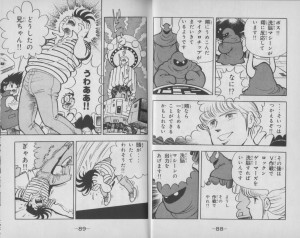 This is where Hajime’s brother Shou comes in. You’ve already seen him a few times. Shou is the Rock’n Gamer with the hair that’s feathered upward and looks violently angry all the time (at least, in this chapter). You may remember my mentioning that at the very start of the series, Shou was both a rival and a mentor to his younger brother Hajime, and a budding celebrity renown far and wide for his gaming skill. It was these abilities that got him kidnapped by BUG’s thugs and taken to a secret facility, where he was fitted with a microchip inside his skull that turned him into a loyal BUG operative.

So just to recap, this organization has international crime connections, almost limitless funds, a scientific foothold on advanced mind-altering technology, on top of perfecting holograms, warping space-time, and true A.I. advancement to the point where completely virtual entities can interact seamlessly with the physical realm. And for all this power, they still spend most of their time chasing tweens and playing video games. BUG, ladies and gentlemen.

Although Hajime and his friends managed to free Shou from the its evil influence by the end of the second book, that mind control chip is still inside him, lying dormant. And at this close a range to BUG’s headquarters, BAL believes they can turn up the brainwashing signal and override his will, making Shou their slave once again. Or, at the very least, fry his brain so badly that the Rock’n Gamers would be forced to retreat. Either way, he’s their ace in the hole. Signal to FULL POWER!!

Screaming and writhing like a man possessed, Shou falls. 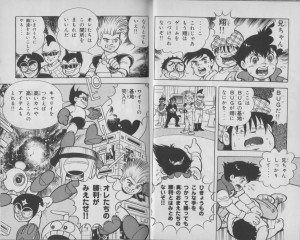 Without a second’s hesitation, Hajime drops everything to attend to his brother. Genba (the chubby Rock’n Gamer with the hat who’s usually the muscle or “Guts Man” of the group) soon realizes this is BUG’s handiwork. The Bit Benders don’t waste time in pressing the advantage, working together to quickly infiltrate the Wily stage. Hajime reprimands the Bit Benders for their dirty tricks, saying that resorting to such methods could never be considered a true victory for them. Not that this soapbox sermon on gaming ethic smakes any difference. True to form, the bad guys don’t care what the circumstances are, so long as they get the last laugh. Winning: It’s everything! 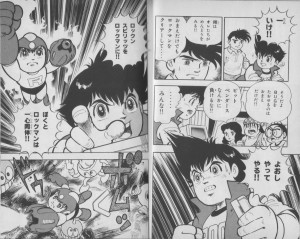 Knowing that Hajime is the best chance they have, the other Rock’n Gamers volunteer to try and help Shou while he goes and wins this bout. Moved by the sacrifice of his friends and the hopes they’ve entrusted to him, Hajime’s Rock’n Spirit shines as he blasts back into action! Hajime announces that he and Rockman’s spirits have become one, creating yet another future parallel to EXE in what you might call the very first Rockman full synchro. More determined than ever, he starts tearing through the stage!

It could just be all the googly-eyes and the round objects there, but to me that last battle scene looks like Hajime’s blazing a trail of death and destruction through Mc Donaldland’s hamburger patch. As Mayor Mc Cheese is burned alive, he prays to his gods Ronald and Ray A. Kroc for an end to the carnage, but in his last moments of immolation, no sense of peace washes over him. Exposed on the hot griddle of fate for all to watch him sizzle, this sad ineffectual puppet government is shown to be easily broken, like so many soft oily french fries. Greasy tears run down his bun-face and into his hamburger patty mouth. So, this is how his lifelong political ambitions are to end: a dream that’s now well done. In his final thought he cursed how it was his fault this terror befell his countrymen, “Oh, if only I’d approved that Mega Man Happy Meal toy…” 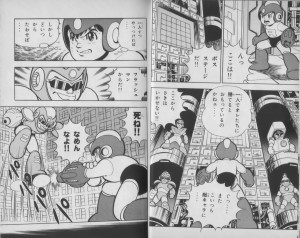 What’s this?! Every robot master has been commandeered by a Bit Bender! Looks like they’ve employed BUG’s Overlap ability to increase their power beyond anything these bosses are normally capable of! To win this game, Hajime’s going to have to defeat each one in turn. Will he be able to succeed? Or will the Bit Benders prevail, allowing BUG’s evil to spread unchecked across the globe? And what will be the fate of Shou?

Coming up next time, the Rockman World climactic showdown! My apologies that there wasn’t a whole lot of Rockman imagery in these last few pages. And for the Mayor McCheese snuff fiction that wound up in there somehow. Sorry, it’s been a weird day.

Ikehara fans, don’t dismay! I can guarantee that the grand finale contains non-stop Rockman combat action right to the very end! Get your weapons ready!!

6 Comments to "ROCK’N the WORLD"