Time for another Retromags adventure! This episode? Mega Man in Dr. Wily’s Revenge! The first game boy Mega Man title, suffered surprisingly little control and graphical disfigurement on the handheld. Anticipation for the title was high, and game publications were making various promises about the upcoming game. But how much of it held up?

We’ll be looking at two previews of Mega Man: Dr. Wily’s Revenge, checking them out for similarities and differences, between each other and the final game. First let’s take a look at Gamepro #19 from February, 1991. 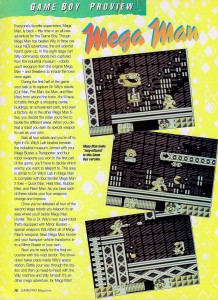 Not bad. But how about some of the more strange things?

Now let’s take a look at some pages from The Official Guide to Mega Man, another guide book from early 1991 that dealt with the upcoming game. Ready? 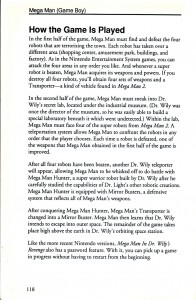 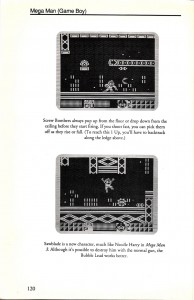 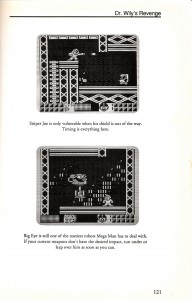 Very similar to the Gamepro Proview, but written more elaborately on story ideas without the same focus on which boss characters would appear. This version shares a lot of the same quirks, like the Transporter becoming a Mirror Buster. It also sports the same screenshots, plus one featuring the new “Sawblade” (Cutting Wheel) enemy.

Both mention the industrial museum as Wily’s base of operations. It’s interesting since the game’s US manual gives far fewer details about the story than either of these previews do. They also mention the four areas of the city occupied by the first wave of robot masters are locations like a shopping center, an amusement park, a factory, and “buildings”. Thinking about the stages, there’s not much to go on as to which were supposed to be what. Would you shop or vacation at any of those stages? Maybe if I could jump 8 feet in the air and had a gun built into my arm.

2 Comments to "Revenge of the Press Release"