We’re playing catchup here at the Lav for that longer than anticipated e-vacation. I had planned for this to go up two weeks ago on the Fourth of July / J-Day of Sigma. Unfortunately, I was playing hookey from blogging that week. So, I could either wait a whole ‘nother year, or we could pretend it’s the right day and you can have this now. What say you? 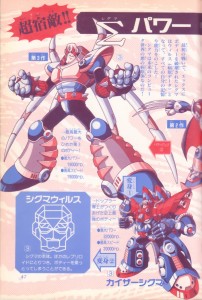 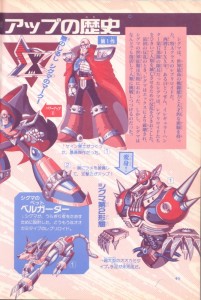 Sigma, the Special A class repliroid who possessed an ingenious intellect and the highest combat capabilities that the world had ever seen.

In the year 21XX A.D. Sigma, who was the Commander of the Irregular Hunter 17th Unit, orchestrated a sudden rebellion that urged repliroids to bring about the downfall of mankind.

At the time of this first rebellion, Sigma was felled by X, and Sigma’s bid for world domination ended in failure. However, Sigma has since returned countless times, continuing his war against humanity.

Evil’s own symbol, the mark of Sigma!

First Model
Created by Dr. Cain, this body was the doctor’s greatest masterpiece. [1]

Sigma Second Form
A truly enormous wolf-type body, its limbs were yet unfinished. [1]

Second Model
With claws equipped on his arms, his attack power skyrockets! [2]

Sigma Virus
The true form of Sigma. Possessing other repliroids, he is able to take over their bodies. [3]

Sigma’s Pet
Velguader
Sigma designed this ferocious wolf-type repliroid to prey upon those who would dare to cross him. [1]

During their first battle, after X destroyed his body, Sigma took on the form of a virus (malicious data), and all his personal memories and faculties were preserved!

Sigma is a pathogenic plague of evil upon our future computer-based society!

Pardon the deep-end red-scale of these pages, they aren’t the work of a haywire scanner but rather the way the book itself was made. I don’t know why so many Japanese books cut corners by restricting the yellow/green ink printing. I think it’s an awful practice, but Kodansha does it a ton. I prefer artwork to be in its full original color, thank you!

Since this book’s collected information reflected only the first three Rockman X games, the great mystery tying of Sigma and Zero’s pasts and how Sigma first came into his virus powers had yet to be revealed. They also skipped mentioning Sigma’s second “Neo Sigma” form in X2, perhaps for its essential similarity to the Sigma Virus form that appeared in the finale of X3. I have a soft spot for the CX4 chip’s wire-framed polygon rendition of the Sigma virus, but I must admit it looses a little of its “oomph” in the rare 2D representation seen here.

That’s it for now. Happy belated Day of Sigma, everyone!

9 Comments to "The Sigma Factor"

« Iceman vies for the number one slot!
Words fail me. »