Rounding out the topic of the week, here’s a two page spread from the back of the Rockman & Rockman X Himitsu Daihyakka (Big Encyclopedia of Secrets). 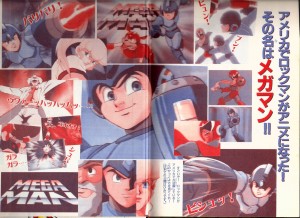 Rockman has become an anime phenomenon in America!
And it’s called MEGA MAN!!

Amazing! Rockman has been very busy in America! Check out all this awesome! (Whether this will ever be presented in Japan is unknown.)

Published in April of 1995, these images from the cartoon’s intro would represent nearly all of what the average Japanese Rockman fan would see or know of the Mega Man cartoon, until that CFC article we looked at on Monday. Thanks to YouTube, they’ve gotten to see a lot more since then.
Posted in anime, blues, capcom, random, rockman, translation