This one’s just for the lulz.

Ever wanting to be first to break an exclusive news item, Gamepro posted this in their March 1994 issue:

Assuming the latest installment of a franchise for a tv series would otherwise have been a good guess, especially with the rave reviews X was getting in those days. Eventually the season 2 episode Mega X would prove them half right.

In November 1994’s issue they made this follow-up report: 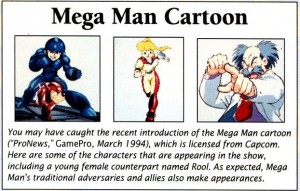 Wow, a female character? Because Mega Man’s never had one of those before. Can’t wait to find out more about this Rool person.

(I need to work on my sarcasm.)

According to Wikipedia, the show started airing on September 11 of 1994. I wonder if that means they write their monthly magazines 2 months in advance or so? I guess that seems about right, but they could have figured that by the time people were reading the magazine they’d probably be more familiar already…

So did I really just make a post to make fun of a 15 year old typo? Yes, I sure did. This is exactly the kind of thing that the internet was built for. Possibly.

In the future I’ll have to remember to do less Wednesday posts.