During the early PS2 era, Capcom would have a bi-weekly (or so) one-page feature in Japanese gaming magazine Famitsu Playstation with this header image. Sometimes the background color would change, but the picture would remain the same. The art features famous faces from many late ’90s Capcom franchises, including many characters from the Rockman series like classic Rockman (with oddly shaped front solar panel almost resembling X’s helmet), Roll Caskett, Data, and a bunch of Kobuns. This particular column I took the scan from was actually about Rockman X5, and the text explains how it had been 3 years since the last main title release in the X series. You can see the rest of the page below. 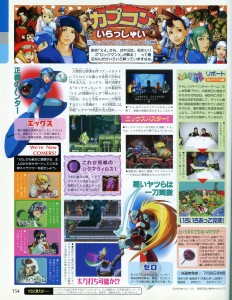 Aside from some minor things, everything shown looks pretty similar to the final version of the game. The top screenshot gives 24 hours until the colony crashes instead of the final game’s 16 hours, and Douglas’ screencap of the opening video still says “DAGRUS” instead of “DOGLAS”, while Lifesaver’s says “LIFE SAVER” with a space in between that would be removed later. There’s also a weird typographical error in one part of the article’s text but other than that, nothing too strange to report.
Posted in capcom, rare art, retromags, X