Time for more answers from The Answer, this time talking about the classic-to-X time interval and the disappearance of Rock’s charge and slide abilities in 9 and 10.

First, let’s address the two about the Rockman => X gap. Then we’ll switch over to the Rockman section for the last question. 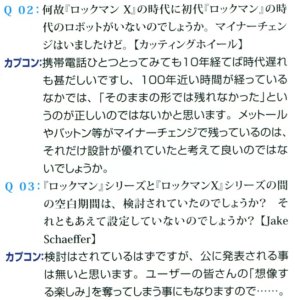 Q02: Why aren’t the robots from the original Rockman time period still around in the Rockman X time period? Especially since there are some robots with only minor changes.

CAPCOM: When you consider that state of the art mobile phones become obsolete in less than a decade, you can imagine how after 100 years you wouldn’t expect to see too many old models still remaining. There are indeed a few Metalls and Battons and such still around albeit with minor changes, so perhaps that’s because their designs are so enduring?

CAPCOM: Of course there is such an outline, but don’t expect an official announcement of it. Players have always enjoyed using their imaginations to come up with their own conclusions, and we wouldn’t want to take that away from them… 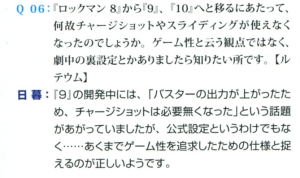 Q06: So sometime after Rockman 8 and before 9 and 10, use of the charge shot and sliding were lost. I want to know if, outside of just being a gameplay thing, is there any canon story-related reason for this?

Higurashi: While we were working on 9 there was an idea tossed around around that went “the Rockbuster’s output was increased, so charging a shot became unnecessary.” But, as far as the official story is concerned… The truth is, it was regarded mainly as a gameplay aspect and nothing more.

Recap: The Metall is the single greatest robot design in 400 years of Rockman history. Capcom has a plan for the Rock-to-X gap, but they aren’t telling–thus, even the craziest of our fan theories were spared. And finally, Rock forgot how to slide and no one at Capcom cared. 🙁

Next time: Capcom tells you to use your imagination more, so they don’t have to use theirs. (I’m joking. Probably)

7 Comments to "The times, they are a-changin’"

« Get XOVER It
What-if Rockman Reboot, Plus Some Battle & Chase Love »

The Second Waltz
Brother Against Brother?
The Rock Manual
Fictional and Futuristic
The Weird, Wild & Whimsical World of “Rock & Rush”