The Rockman Character Collection: a 60 page booklet made as a special gift and sent to those who entered the boss character design contest for Rockman 4. In the closing of the book is a brief page-and-a-half talk with members of the development team at Capcom, discussing some development trivia, including some things I’ve not heard mentioned before or since. I’m guessing maybe you haven’t either. 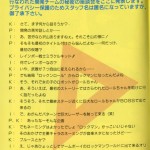 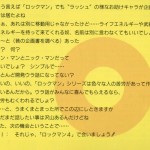 To commemorate the publication of the Rockman Character Collection, a secret round-table meeting was held with members of the development team. Here was the result!
Please understand, for the sake of protecting the privacy of the staff they will be identified only by an initial.

K: So then, what should we talk about?

P: How about all the setbacks and difficulties we ran into during development….

I: Ah, if it’s troubles we’re discussing, then we’ll have plenty to talk about. A mountain of woe!

P: We had worries from the get-go, even just coming up with the title…… Hey, what was that first title we were considering again?

K: Well, he had those 7 weapons that would make him change colors……

P: But eventually we decided to go with “Rockman” after “Rock’n’Roll”.

P: Oh that reminds me, at first the story was going to be about Roll-chan getting kidnapped and having to go save her.

K: Oh yeah! And then in the final stages there would have been a giant Roll-chan that appeared as a boss.

I: Sure, and I bet when she made that praying gesture it would fire a giant laser. (laughs)

P, K: There really was something like that planned!

K: But anyway, the naming scheme really worked out well. “Rockman” sounds so cool, doesn’t it!

P: And after that we started naming many of the principal characters as musical references. It became a sort of running gag……

I: Huh, so does the original character “Enker” from Rockman World for the Game Boy have some similar meaning, too?

P: Of course, the heart and soul of Japan!

P: Speaking of, there’s a “Rockman” support character like “Rush” that was in the planning stages.

K: Ah yes, but that one’s primary use wasn’t for mobility….. It would have brought things like life energy and weapon energy to the player, but perhaps we shouldn’t bring up its name.

P: Hmm (Ruffling through the old proposals) found it!

I: Is it really okay to be discussing all these inside stories?

K: Oh yes, it’s fine, it’s fine. The “Rockman” series was created through a lot of people’s hard work, after all. By sharing those stories with others who can appreciate them, the troubles we endured become all the more rewarding, wouldn’t you agree?

P: ……Well, looks like this is a good place to wrap up. Even though there’s still a bunch more I know we would have liked to talk about.

I: I guess it’ll have to wait until next time…..

To me, “K” sounds a lot like Keiji Inafune. For his knowledge, sure, but also just something about the way he talks. “P” sounds like someone who’d also been in on Rockman since the beginning, and “I” sounds like someone who had joined the development team more recently, perhaps with 3 or 4, but I’m not too sure who either of them would be. “Privacy of the staff…” I imagine the truth is closer to them not being allowed to use their names. The staff roll end credits would still use their made-up nicknames for the next several games, and the era of “star” developers getting credit for their work still a few years ahead.

Mega Man Official Complete Works introduced most of us to “Rainbow Warrior Miracle Kid”, and the music-themed naming scheme has been recognized for decades, even outside Japan.

Yet I cannot for the life of me ever EVER remember hearing that Roll kidnapping idea for Rockman 1 before. When I think about it, it was one of the few action/adventure games of the era that wasn’t about rushing to the aid of some damsel in distress. It’s really not surprising that such a plot was considered, in fact it’s probably more surprising that kidnapping the girl wasn’t included in some way, especially when that’s more or less what the plot alludes to for the other warriors (and is shown explicitly in Rockman Rockman). And then to have her as an end boss, too? Now that would have changed some things! Move over, Splash Woman! Not entirely sure if they were serious about holy prayer lasers, but having clasped hands is her normal sprite pose. Strange that they once considered to have such a large role, then wound up minimizing her so much that she didn’t even get mentioned in the manual. Wonder what her giant battle form might have looked like. Like her MvC Hyper Roll outfit, perhaps? Actually, I’d sooner imagine something like the Guts Tank with Roll’s face…

I’m betting “An-Man” and “Nikku-Man” are references to anman and nikuman–or sweet rolls and meat rolls, two types of manju. (Rockmanju anyone?) When bit into or cut in half, these treats may resemble the games’ energy items. So the guy would have been named for treats… Well, makes as least as much sense as “Eddie” (if not more). It’s a safe bet that either of those names would have been changed in localization.

Allrighty, I think that’s enough ancient trivia for one day.

5 Comments to "Think About Your Troubles"