Rockman 7 saw Forte snatch away the main “Rockman’s rival” slot, but Blues still came out looking cooler than ever.

From page 35 of the Rockman 7 & Rockman X Chouhyakka: 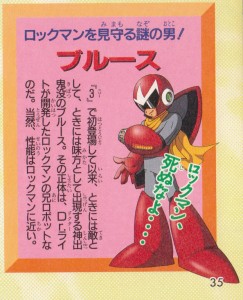 The mystery man who watches over Rockman!
Blues
Blues made his first appearance in “3”, where he’d pop up unexpectedly sometimes acting as an enemy and at other times as an ally. His true nature is Rockman’s older brother robot developed by Dr. Right. Naturally, his abilities are quite similar to Rockman’s.

In Rockman 7, Blues played a large but entirely optional part. First giving helpful advice, then challenging Rockman to one of the most epic duels of the series, followed by rewarding him with the powerful Blues Shield. It marked the first time since Rockman 3 that Rock and Blues battled each other, and it’s definitely one of my favorite Blues moments. Like many of the scenes in 7, the dialog before and after the battle changed slightly between the Japanese to the English versions. Compare below:

Like we mentioned earlier this week, Rockman is unaware that Blues is his older brother. The English version of the script added references to the two being brothers, while dropping being careful around “that guy,” probably referring to Forte. Which version do you prefer? Why not share it in the comments below!

3 Comments to "Brother Against Brother?"

« The Mystery of Blues Continues
Give a Little Whistle »